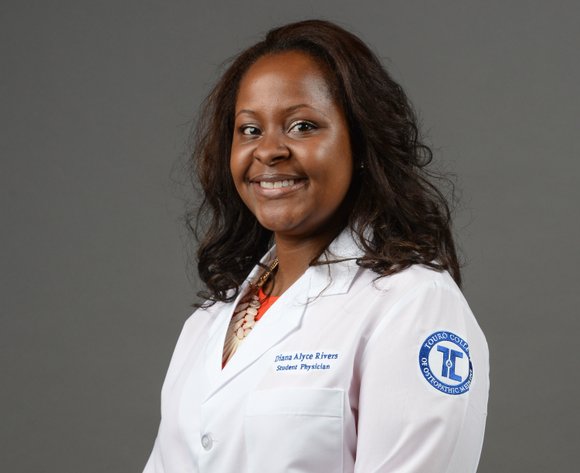 The scholarship, which derives its name from former AACOM Executive Director Sherry R. Arnstein, honors minority DO students. Every year, at least two students who attend one of 30 AACOM-accredited colleges are awarded the scholarship.

Rivers is the fourth Touro medical student and the third from Touro’s Harlem medical school to win the $2,500 scholarship out of 24 recipients since the awards were initiated in 2012.

“I am honored to be one of the recipients,” said Rivers, who is currently on a surgical rotation at St. Mary’s Hospital in Passaic, N.J. “The financial assistance that this scholarship provides propels me one step closer to attaining my lifelong dream of becoming a dermatologist, with a focus on ethnic dermatology.”

In her application essay, Rivers described the path that led her to TouroCOM. As an African-American woman raised in the South, she was exposed to the belief that “not all ailments require pharmacological treatment and that sometimes food, prayer, meditation and other healing methods could be used, which attracted me to DO school.”

But her interest became more serious when shadowing a pediatrician, who was treating an infant with breathing issues. “As a DO, this pediatrician simply used observation and palpation to determine that the child had pneumonia when none of the other physicians in the practice could determine that without further testing,” Rivers wrote.

Rivers completed her master’s degree in interdisciplinary studies in biological and physical sciences at TouroCOM in 2012, and then entered the DO program.

“I find Diana to be very motivated,” said Maria Pino, Ph.D., assistant professor of pharmacology. “She is excited about medicine, and not only is she doing well in her coursework, she’s also very involved in the research aspect of medicine.”

In addition to her regular classes, Rivers has been working as a teaching assistant, this year winning the Osteopathic Manipulative Medicine Teachers Assistant Award; serving as president of the Student National Medical Association, through which she worked on increasing diversity in medical school; providing free medical screenings in the Harlem community at health fairs; and mentoring high school students in the Bronx and East Harlem who have an interest in medicine.

But it’s Rivers’ commitment to motivating more minority students to become osteopathic physicians that is at the core of her Arnstein award. This dedication led her to help implement a program called ShaDOw Days. On ShaDOw Days, minority pre-medical students from colleges around the city come to TouroCOM and sit in on OMM lectures and lab sessions and shadow minority medical students.

“Students learn the techniques and practices of osteopathic medicine to determine if DO school is the type of medical school that suits their interests,” Rivers said. “This [also] gives them a chance to connect with someone from within their community and visualize this as an achievable career goal.”

As a follow-up, Rivers established Neighborhood Networking Mixers, at which students connect with physician mentors to help them better understand the challenges facing minority doctors, and dispel myths and confirm realities about osteopathic medicine.

In her free time, Rivers has her own health blog, MochaBelle. The blog includes health tips and treatments that are specific to minorities and strives to promote minority health and self-improvement.