Learning to code with the Code Crew 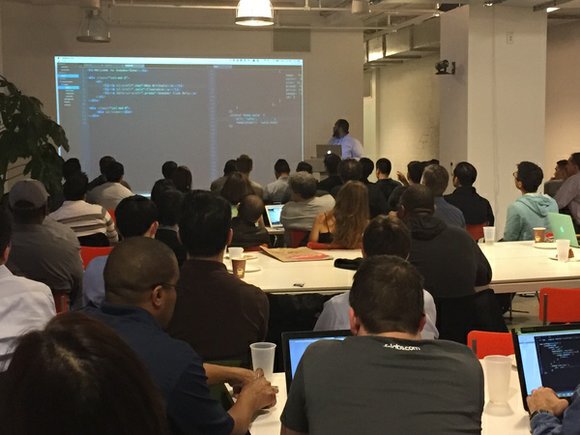 The Code Crew was founded in 2013 by Felicia and Jamal O’Garro, a married couple living in New York City. The Code Crew is a program that provides opportunities for people who are interested in engineering and technology. Their main focus is to promote the notion of diversity in technology.

“For big organizations like Google and Yahoo, the percentage of women and people of color who are employed is extremely low,” said Felicia O’Garro. “We want to provide opportunities and to encourage them to pursue careers in technology.”

Along with teaching classes about JavaScript, iOS development, Python, HTML/CSS, Node Js and Ruby on Rails, they have a star program that was recently launched. It’s basically a 12-week iOS development program in which potential participants have to go through a couple of stages to see if they are even eligible to be a part of the program. Hundreds of applicants applied for this program, but the Code Crew only selected nine people. Of the nine who were selected, two were displaced workers and seven were women. “There are no requirements to be a part of the program, we are more focused on completing our mission,” Felicia said.

Jamal O’Garro is an ex-finance man who has a passion for entrepreneurship and New York City development culture. He has side projects that include implementing algorithmic trading strategies in Python, attending hackathons and teaching others how to code. Felicia works with Code Crew and works full-time as a software developer at an entertainment and media company in New York City.

The Code Crew has become a very prominent fixture within the technology community. Within two years, they have reached almost 10,000 members, and they have taught thousands of students, encouraging them to pursue careers in engineering.

They also partnered with local government to provide software. They were also able to speak at the White House’s first Tech Summit in 2015.

Felicia and Jamal O’Garro created Code Crew because of the lack of diversity in the technology community. They wanted to show two epitomes of African-Americans in the tech industry, who got jobs and became leaders of one of the largest technology-based meet ups in New York City, “Let’s Learn to Code Together.”

“I am women and I am an African-American who taught herself how to develop skills. After college, I became a social engineer,” Felicia told the AmNews. “I just want to spread the message that goals like this are achieveable”