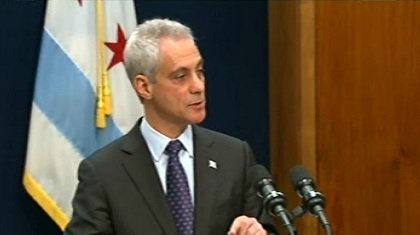 (CNN) -- Chicago Mayor Rahm Emanuel said Tuesday that he has asked for the resignation of Chicago Police Superintendent Garry McCarthy.

The announcement at a news conference came amid angry protests in Chicago over the way the city responded when a white police officer shot a black teenager 16 times in October 2014. Dashboard camera footage of Laquan McDonald's killing was not released until last week after a judge ordered it be made public.

"Superintendent McCarthy knows that a police officer is only as effective as when he has the trust of those he serves," said Emanuel, speaking at City Hall.

He went on to describe a new task force on law enforcement accountability that will review how the city trains and oversees its police officers. It will include five Chicagoans who have been leaders in the justice system. Chicago native and former Massachusetts Gov. Deval Patrick will be a senior adviser to the group, Emanuel said.

The turmoil in Chicago echoes outrage seen repeatedly throughout the country over the past year, and it reflects a national campaign led by Black Lives Matter activists that says that police across the country discriminate against black people. They point to cases in New York; Ferguson, Missouri; Baltimore and other cities, where they say that cops use excessive -- sometimes deadly -- force against black males.

In Chicago, the outrage has been focused squarely on the killing of McDonald in October 2014. Dashboard camera footage recorded the teen, who was carrying a 4-inch knife, walking yards away and turning his back to Officer Jason Van Dyke when Van Dyke opens fire, shooting the teen 16 times.

A freelance journalist filed suit, arguing that the video was public record. The city went to court to prevent its release. A judge sided with the journalist, and the footage was released last week.

Protesters have repeatedly demanded that Emanuel resign, the chief of police be fired and a federal investigation examine the behavior of public officials involved in the case.

A rally is planned for Tuesday afternoon.

Officer out of jail

When the video was released last week, Van Dyke was charged with first-degree murder.

He walked out of jail on bond Monday evening after a judge set his bail at $1.5 million. He is suspended from the Chicago Police Department.

Van Dyke had a history of complaints before he gunned down McDonald, and in almost every case, he was cleared in one way or another. The allegations mostly involve excessive force, and at least one complaint alleges that he used a racial slur.

There appear to be no criminal proceedings against Van Dyke before last week, but a jury did award a Chicago man $350,000 after determining that Van Dyke used excessive force during a traffic stop. (The city of Chicago also gave McDonald's mother, who had not yet filed a lawsuit, $5 million in April.)

Meanwhile, an online threat caused fear in the city when a man allegedly said he would shoot white men to avenge McDonald's death. Jabari Dean, 21, was arrested and accused of threatening to kill students and staff at the University of Chicago.

According to a criminal complaint, Dean posted the threat on social media this past weekend.

"This is my only warning. At 10 a.m. on Monday mourning (sic) I am going to the campus quad of the University of Chicago. I will be armed with a M-4 Carbine and 2 Desert Eagles all fully loaded. I will execute aproximately (sic) 16 white male students and or staff, which is the same number of time (sic) Mcdonald (sic) was killed," the post read.

"I then will die killing any number of white policemen that I can in the process. This is not a joke. I am to do my part to rid the world of the white devils. I expect you to do the same."

Dean is charged with transmitting a threat in interstate commerce. He is facing up to five years in prison.