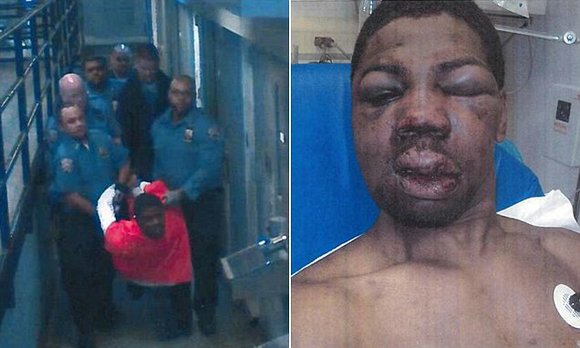 He endured violence at the hands of Rikers Island correction officers and survived, but Robert Hinton met his untimely end closer to home.

Nov. 27, Hinton, a former inmate who won a $450,000 settlement in a brutality lawsuit, was shot in the head and killed in front of the Van Dyke Houses in Brownsville, Brooklyn. Hinton called the nearby Bedford-Stuyvesant neighborhood home. According to reports, a second victim was shot in the leg and is expected to survive. Police spokespeople have announced that they don’t have any leads in the case.

Hinton was expected to receive his settlement sometime this month.

Two months ago, Hinton was awarded a six-figure settlement because of an incident that took place several years earlier. In April of 2012, Hinton was hog tied, beaten and choked by five Rikers Island correction officers led by Capt. Budnarine Behari. When it ended, Hinton was left with a broken nose, broken vertebrae, a mouth filled with blood and both eyes swollen shut.

Although Hinton did time in Rikers because of attempted murder, was affiliated with the Bloods gang and was arrested twice this year, he had hoped to turn his life around with the cash settlement as the catalyst. Hinton planned on purchasing a house outside of the city and starting a new life.

Department of Correction Commissioner Joseph Ponte fired Behari and the five officers this past January.

“When I took the job to lead the New York City Department of Correction last spring, I found that decades of neglect and failed initiatives had produced unacceptable conditions on Rikers Island, including alarming rates of violence against staff and inmates,” said Ponte in a statement back in January. “I immediately began making substantive changes where we could.”

Some of those changes come via New York City Mayor Bill de Blasio and Enhanced Supervision Housing, which entails a non-punitive but highly secure housing for the small percentage of inmates (around 7 percent of the jail population according to Ponte) who commit the majority of violent acts in their jails. Hinton’s lawyer, Nicole Bellina, said that the courts will decide how Hinton’s money will be distributed. Most likely, the money will go to Hinton’s estate.