Not so random Thanksgiving acts 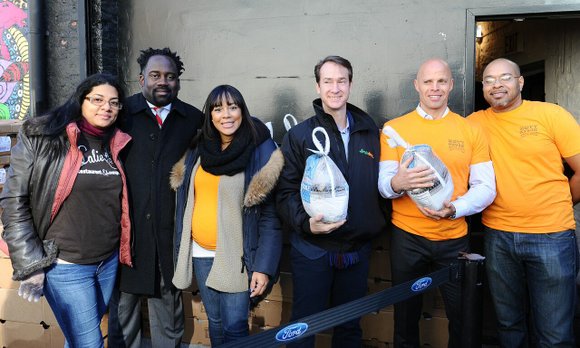 The holiday season is always a time to stop and take stock in friends and family. It is also a time of great generosity of spirit. Among many other random acts of giving, this Thanksgiving brought chefs, politicians, not-for-profit organizations and a grocery delivery company together to give back to the community.

Renowned chef David Burke joined Maria Cuomo Cole at the HELP USA shelters on Wards Island to work with homeless men and women in the HELP USA Culinary Arts Training Program to prepare a special pre-Thanksgiving lunch for several hundred homeless residents. Burke used produce and herbs grown at the one-acre farm at the shelter by the homeless residents in conjunction with a nonprofit called Project EATS.

FreshDirect partnered with Bronx Borough President Ruben Diaz Jr., City Harves, and local South Bronx merchants to distribute 400 turkeys to community members in the South Brox at the Mott Haven Bar and Grill for their Thanksgiving meals. The event was just one of 12 turkey donation events that FreshDirect co-hosted leading up to Thanksgiving. FreshDirect donated turkeys in Philadelphia, the Bronx and other areas in New York City.

“FreshDirect strives to be a good corporate neighbor in the communities we serve,” said Jason Ackerman, co-founder and CEO of FreshDirect. “Thanksgiving is an important time to give back to those in need.”

“When FreshDirect announced that they wanted to move their headquarters to the Bronx, we worked closely with their management regarding community concerns,” said Diaz Jr. “The Thanksgiving turkey distribution event in Mott Haven shows that FreshDirect is serious about being a good neighbor and upholding the commitments they made.”

Thank you for your efforts. Let’s carry it through this season and beyond.