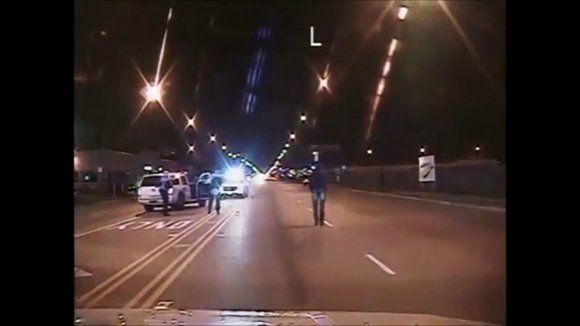 Police released a video Tuesday showing the shooting of 17-year-old Laquan McDonald, who was killed by an officer in October 2014. Chicago Police Department

(CNN) -- Chicago police reports on the fatal shooting of 17-year-old Laquan McDonald last year are "dramatically at odds" with the dashcam video that triggered protests in the city, according to the Chicago Tribune.

In a new report Saturday, the newspaper says it has seen hundreds of pages of newly released Chicago police reports.

The internal police documents, it says, portrayed McDonald as threatening in a manner inconsistent with what is shown on the video.

Specifically, at least six officers said McDonald was moving toward officers when the video shows he was walking away, the newspaper reports.

Officer Jason Van Dyke has been charged with first-degree murder in the case. Van Dyke said McDonald was advancing on him and brandishing a knife

While some officers said they didn't see what happened ... at least five others, along with Van Dyke, corroborated his account, The Tribune reported.

"If the criminal investigation concludes that any officer participated in any wrongdoing, we will take swift action," police spokesman Anthony Guglielmi said in a statement.

Video of another police shooting

With aftershocks from the release of dashcam video showing McDonald's shooting still rumbling through Chicago, a dashcam video of yet another fatal police shooting is about to be released.

Mayor Rahm Emanuel said Thursday the city will release video showing the death of Ronald Johnson, 25, more than a year ago, according to CNN affiliate WLS-TV.

There was no indication from city officials on when the video would be made public.

But Emanuel's announcement came a week before U.S. District Judge Edmond Chang is scheduled to decide Thursday whether to compel the city to release the dashcam video.

Johnson was shot and killed by Officer George Hernandez in October 2014.

According to a preliminary police statement released the same day as the shooting, Johnson pointed a weapon at pursuing officers, after first attempting to flee on foot.

'Y'all covering up this murder'

Johnson's mother, Dorothy Holmes, says the dashcam footage of the shooting proves her son was slain, and is pushing for the video's release to the public.

"Y'all covering up this murder. It's been over a year now that my son been murdered and y'all still haven't did y'all job to convict this cop of murder. Shouldn't nobody have to go through this pain over their kids," Holmes told reporters Tuesday.

Johnson's case -- and the video -- is receiving renewed attention in the wake of the case of McDonald, a black teenager.

McDonald, was shot and killed by a Chicago officer in October last year, eight days after Johnson. Dashcam video of that shooting was recently released after a judge ordered it be made public, sparking outrage and protests.

The fallout from McDonald's death -- and the fact that it took 13 months for the police department to release the video of the shooting -- has rocked Chicago and led to Chicago Police Superintendent Garry McCarthy's resignation.

Many people who took to the streets questioned why it took so long to release the video.