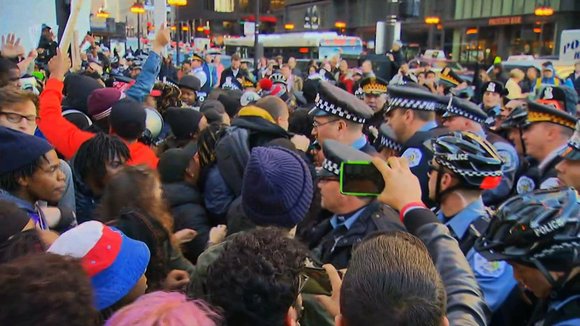 The fallout continues over the video of a CPD officer shooting 17-year-old Laquan McDonald in 2014. The video was withheld for more than year, which further angered Black residents already distrusting of the Windy City’s police force.

The case of Ronald Johnson, who was killed by police eight days before McDonald, was brought to light after video was released of his shooting. However, Cook County State’s Attorney Anita Alvarez said the officer who killed Johnson won’t face charges because Johnson allegedly had a gun.

Video also surfaced of the Tasing death of Phillip Coleman, who died at a hospital after suffering an adverse reaction to an antipsychotic drug. The video shows six officers entering his cell and Tasing him.

Wednesday, the world learned about the police shooting death of 17-year-old Cedrick LaMont Chatman, who was killed near a bus stop nearly three years ago. Officers thought he was armed, but the 5-foot-7, 133-pound teen was carrying an iPhone. Police claim he had a knife and was resisting arrest after allegedly fleeing a stolen car.

The officer involved in that shooting has been charged with first-degree murder. Five cameras captured the shooting. A judge will decide in January if the video will be released.

In the wake of the fallout, CPD Superintendent Garry McCarthy resigned amid public pressure. However, the community continues to put pressure on Chicago Mayor Rahm Emanuel to step down amid the controversy.

Wednesday, in an effort to restore the public’s trust in the CPD, Emanuel apologized about the McDonald shooting and vowed changed to the department. He wants to expand the use of body cameras and break the officers’ “code of silence.”

“I own it,” the mayor said. “I take responsibility for what happened, because it happened on my watch. And if we’re going to fix it, I want you to understand that it’s my responsibility.”

Attorney General Loretta E. Lynch announced today that the Justice Department has opened a civil pattern or practice investigation into the CPD. The investigation will seek to determine whether there are systemic violations of the Constitution or federal law by officers of the CPD.

“Building trust between law enforcement officers and the communities they serve is one of my highest priorities as attorney general,” said Lynch. “The Department of Justice intends to do everything we can to foster those bonds and create safer and fairer communities across the country. And regardless of the findings in this investigation, we will seek to work with local officials, residents and law enforcement officers alike to ensure that the people of Chicago have the world-class police department they deserve.”

During the course of the investigation, the Justice Department will consider all relevant information, particularly the CPD’s policies, training and practices related to using, reporting, investigating and reviewing force.

Sunday, the Rev. Jesse L. Jackson Sr., the members of Rainbow PUSH Coalition and a number of political, community and religious leaders continued their call for justice and fairness in the police shootings of unarmed people of color.

Jackson and the group marched from State and Van Buren, down State Street, to the Thompson Center in Chicago. He is calling for a special prosecutor to take over the Laquan McDonald shooting case.

“We do not believe that the current state’s attorney, and her office, can conduct an impartial, fair and just investigation of the McDonald case,” Jackson said. “To ensure that justice is achieved in this case, there cannot be any questions of conflict of interest on the part of any persons who have the awesome task of presenting this case before a judge or jury for ultimate prosecution.”