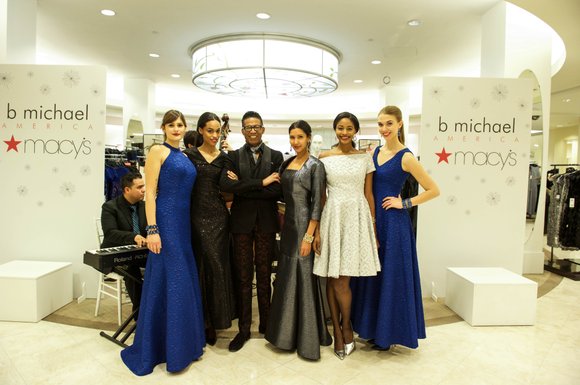 Dec. 5 and 6 in Washington, D.C., the 2015 Kennedy Center honorees included Cicely Tyson, who was honored for her lifetime contribution to American culture through the performing arts. At the State Department dinner, Tyson was attired an original couture-fitted b michael AMERICA gown with a trumpet bottom and matching trapeze bolero in dazzling navy ruched silk organdy. For the White House reception and Kennedy Center ceremony, Tyson wore of a gown similar to a style from B Michael’s spring ’16 collection. It was a strapless mermaid shape with a petal-back train and matching bolero. The jacket was enhanced with six-point, cuffed sleeves in a gold silk tulle pattern. The ensemble was accented with jeweled embroidery and an overlay champagne silk gazar. Other Kennedy Center 2015 honorees included singer-songwriter Carole King, filmmaker George Lucas, actress Rita Moreno and conductor Seiji Ozawa.

Dec. 3, Macy’s Herald Square hosted a special holiday celebration for designer B Michael. The event highlighted his new collection of high society dresses. Notable guests included Audrey Smaltz, Lynn Savarese, Shirley Madhere and Gail Marquis. Marquis was named to the USA Basketball National Team that represented the U.S. at the 1976 Olympics. This event was magnificent, and B Michael’s collection of dresses and gowns are just what need to be in your closet for holiday soires. Good Show!

Dec. 2., in Miami, Fla, Burberry and Art Hearts Fashion held an opening night gala to introduce Planet Fashion TV. It was all about “art loves fashion” and featured Amato Haute Couture, House of LiJon Sculptured Couture and Mister Triple X by Eric Rosete. Spectrum Art Fashion is one of the highlights of the Art Fashion Week. There were artists from around the world. Even Saks Fifth Avenue opened a pop-up shop during the event.

The event was sponsored by three wonderful companies. Burberry is a luxury fashion house known for its craftsmanship and reference to British heritage. Planet Fashion TV is based in Miami, Fla. and is produced by Sea Star Films, a full-service, commercial, TV and event production company. Art Hearts Fashion is a bi-coastal designer showcase that features collections from the world’s freshest and artistically inspired designers. Organic Face, the official beauty sponsor, worked feverishly behind the scenes on superb makeup for the show’s models. They created beautiful visions of life and grace.

The theme of Spectrum Miami 2015 explored the act of illumination and the creativity that’s emerging from artists. The presentations created an illuminating journey through time, Mister Triple X opened the show with a futuristic ensemble, followed by chain-mail creations by House of LiJon. The show closed with show-stopping designs by Amato Haute Couture.