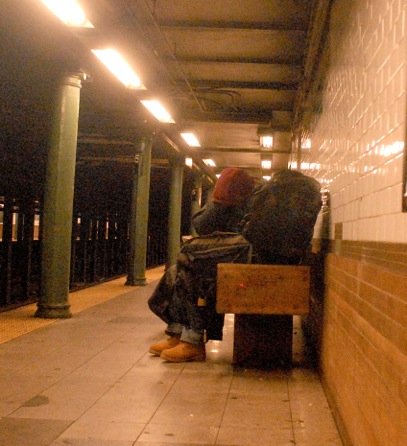 For Morgan and people like her, however, it’s the same old story until further notice.

“I work seven days a week, eight hours a day, so it’s kinda hard for me to be looking,” said Morgan. “Any apartment ad that comes in the newspaper, I’m filling it out. Even if I’m not qualified, I fill it out and send them because I think somebody is gonna pick me.”

Morgan is desperate to get out of the shelter system that she feels isn’t conducive to getting back on one’s feet. “I see why people would want to live in the streets,” she said. “These shelters are awful. There’s people here that don’t sleep at night … you got the people who want to fight. There’s people who steal, and the food is awful. The first shelter I was in had 3 microwaves, and there were 300 people [in the place].”

Despite of her troubles, Morgan said she keeps pressing on with the help of her belief system. When asked how she keeps on despite the chaos around her, she said, “The faith of the Lord. That’s all that keeps me. One day, very soon, I’m gonna be out of this mess.”