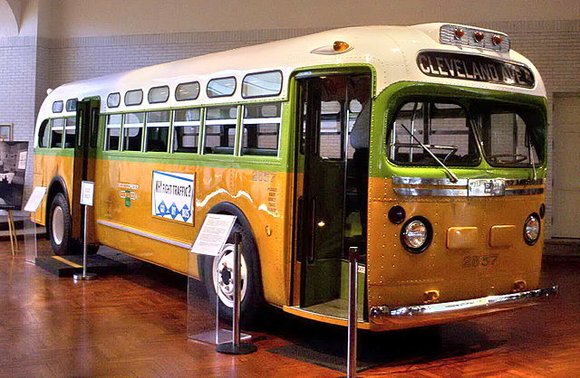 Rosa Parks’ defiant stance against the racist Jim Crow laws of the segregated South kicked off an economic boycott against the National City Lines Bus Company in Montgomery, Ala., which lasted a little more than a year. This event was one of the most significant moments of the Civil Rights Movement, as it helped heightened awareness about the economic power organized people have.

While riding home from work on Dec. 1, 1955, 42-year-old Parks refused to surrendered her seat to a Caucasian man as she sat in the front row of the “colored section” in the back of the bus. The driver, J. Fred Blake, instructed her and three other Americanized-Africans who sat alongside her to stand and make room for boarding Caucasians. The three others meekly obeyed, as was normally done in that time and place, but Parks steadfastly refused. She was arrested and fined $10, plus $4 for court fees.

“We have been reluctant to take the economic component of our struggle and make it work for us … that’s the important lesson to learn from the boycott,” said historian Dr. Leonard Jeffries. “Eventually, because we were so crucial to the financial success of the bus company, they submitted to Black economic power, and that should’ve been a major lesson for our people because it was an enormous victory.”

Although African-Americans constituted approximately 75 percent of the riders, the city hesitated in meeting the MIA’s demands. Protestors refused to patronize public buses until the city ceded to certain requests. In the meantime, they conducted carpools, and boycott organizers demanded Black bus drivers be hired, and that a first-come, first-seated policy be implemented on the buses. Several other cities in the South also followed suit.

June 5, 1956, a federal court ruled that segregation on public buses was unconstitutional, and that following Dec. 21, the boycott ended—381 days after it began—and Montgomery buses were integrated. But even so, Montgomery bus stops remained segregated.

“Our persistence was greater than their resistance to keep us down,” said Jeffries. “We should have thought that now that the bus company has been brought to its knees, we should purchase it and reorganize it so that we control the bus company that’s so important to our community.”

The success of the non-violent methodology garnered much attention and thrust King into the spotlight, making him a prominent figure of the Civil Rights Movement. The mass media coverage placed much needed attention on the racial inequality occurring in the U.S. and displayed the unification resistance can cause.

“Economics, politics and culture have to be linked together as a systems capability … the ability to control your world, what you produced, manage what you produce to improve your economics,” concluded Jeffries. “If we learned anything from the bus boycott it’s that the economic dimension has to be greatly improved and developed so that we’re not the door mats of this society.”