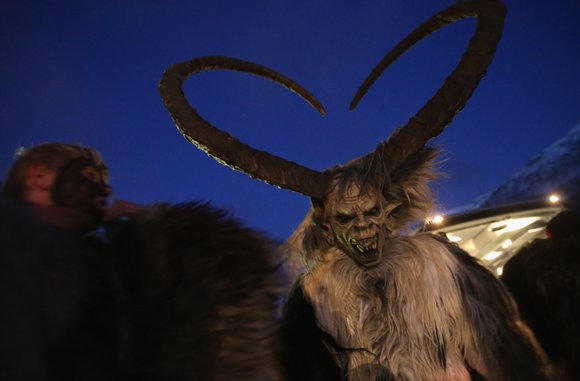 It’s a few days before Christmas. The Engel family—mother, father, son, daughter, and paternal grandmother—prepare for relatives to arrive for their annual holiday visit. None of the Engels really like the visitors—Mrs. Engel’s sister, her husband and four children. To make matters worse, they unexpectedly bring Aunt Dorothy, a drunken, constantly complaining soul.

In frustration over another ruined Christmas, the Engels’ son Max tears up his letter to Santa, opens his bedroom window and tosses it to the wind. Little does he know that that act will bring a horrific calamity to his town the next day in the form of a bone-chilling blizzard that brings more than snow and wind. Max’s actions revive an ancient demon who visits those who have lost the holiday spirit.

“Krampus” will snow you over and it’s a “See It!” One of the strongest aspects of this film is the solid character development. These are colorful and interesting people, maybe you’ll like them or maybe you won’t, but you won’t be indifferent to them. Once the connection is established between these personalities and the viewers, the arrival of the Krampus monsters makes the film even more interesting. These beasts have a wide variety of ways to scare, harass and destroy their victims.

Except for some of the dialogue, this is a very well-written screenplay. For example, when a toy-turned-monster attacks Mr. Engel, he responds, “Are you kidding me?” A toy comes to life and violently assaults him and he responds as he might if approaching a traffic jam? Later, when his wife removes a sharp object embedded in his back, he says, “Thanks, honey,” as if she had just brought him a beer.

It’s difficult to rate the diversity of “Krampus.” It is about a family, and while diversity in families is not uncommon, it would be unfair to be overly critical of the lack of diversity among the 10 family members, but I rate Krampus a “C” because in the early scenes of the movie, shoppers going crazy over bargains at local stores include multicultural lunatics among the bargain hunters.

Overall, “Krampus” is a highly entertaining production and you don’t have to be a horror film fan, as I am not, to really enjoy it.

“Krampus” is rated PG-13 for sequences of horror violence and terror, language and some drug material. It cost $15 million to make and is 98 minutes in length.