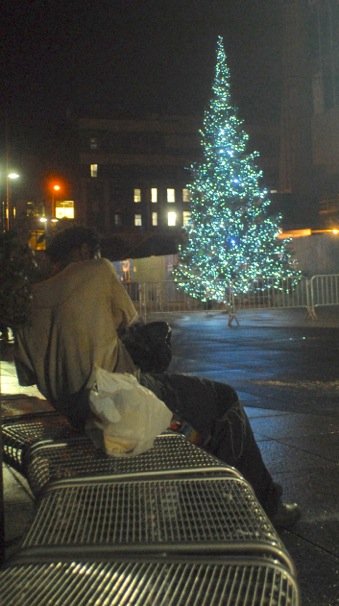 Jesus Morales has been homeless and living on the streets for the past 15 years. On Oct. 2 in East Harlem, he was one of three homeless people who were the victims of NYPD officers who tossed his belongings into the trash, deepening the pain of having no place to call home.

As the temperatures get colder and the holidays season presses on, the problem facing homeless New Yorkers does not appear to be going away. However, several homeless people, including Morales, are fighting back against the city for their rights.

Picture the Homeless and the New York Civil Liberties Union filed notices of claim this week over personal belongings seized and destroyed by city officials Oct. 2. The personal possessions taken and thrown away by NYPD officers and other city officials included medication, family photos, birth certificates and other important documents.

In conjunction with the lawsuit, homeless advocates launched the campaign #TheThingsWeCarry, asking for humanity in the treatment of homeless New Yorkers this holiday season.

“We had to do this because the mayor won’t do the right thing,” said Morales. “When elections come, people need to know that he stands for hurting homeless people.”

Video of the incident was released Monday that shows an interview of a homeless man named Floyd Parks, who has been homeless since 2013, along with surveillance footage. NYPD officers and Department of Sanitation workers are seen kicking Parks and the others and telling them to wake up.

He said officers accused him of being in possession of stolen property, which was a crate. His birth certificate, medication, ID card, Social Security Card and clothes were thrown into the garbage. Parks said officers denied him the opportunity to retrieve his belongings.

“No one should be treated like this,” said Parks. “Cops treat me like I’m nobody, like I’m an animal. A dog for them to kick around. That’s why I’m stepping up and participating in this legal action against the NYPD, and the administration. Why are people OK with living in a police state? I’m not, and that’s why I’m fighting back.”

Mayor Bill de Blasio’s administration’s announcement of Home-STAT, in the midst of the holiday season, increases the number of NYPD officers involved in street outreach. Homeless advocates say the city’s reliance on NYPD officers and the goal of moving people from public sight is misguided and leads to criminalization without addressing the core issue of permanent, affordable housing.

“Homelessness is a tragedy, not a crime,” said NYCLU Executive Director Donna Lieberman. “The government has no right to treat homeless people’s few personal possessions like garbage. No matter how much pressure the city is under to address homelessness, all people deserved to be treated with basic humanity.”