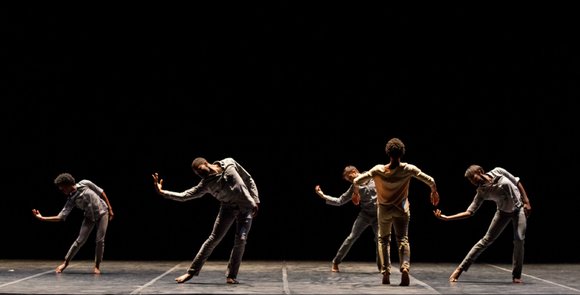 For his first full evening at the Joyce Theater, Kyle Abraham and his company, Abraham.in.Motion, played to sold out houses, and rightfully so. The show opens, and unexpectedly, Abraham, lit softly, appears. He is close to the audience, near the first rows, in front of the piano, moving as if in a trance. Eyes cast down, he glides from limb to limb, to the smooth sounds of Kris Bowers on piano. For a short while, Abraham and Bowers quietly trade magical moments. They slowly finish, the lights go out, and without pause, the curtain rises for the beginning of what would be an evening of more soulful dancing and equally poignant live music.

Abraham tackles headline stories that fall under the “Black Lives Matter” message in “Absent Matter” (premiere) and “The Gettin” (2014), and leaves time to contemplate on other pressing matters in “The Quiet Dance” (2011). Created in collaboration with musicians Bowers and Otis Brown III, plus the company, “Absent Matter” is solid from beginning to end. The backdrop is a screen emblazoned with images of protest, while on stage, in Abraham’s signature movement style (fiercely technical lines mixed with jutting joints and easy transitions), the dancers capture the history (far and near) and make it happen now. Hear me now: Each movement seems to call out, begging for attention for the issues at hand.

Jaw-dropping solos come from Catherine Ellis Kirk in “The Quiet Dance,” Tamisha Guy in “Absent Matter” and add to that the perfectly matched pairing of Matthew Baker and Jeremy “Jae” Neal in “The Gettin.” Vinson Fraley Jr., Penda N’diaye and Connie Shiau are also featured. Shiau dances the solo in “The Quiet” on alternate nights, and Ellis Kirk alternates with Guy in “Absent Matter.”

Music rounds out the evening, surely because Abraham loves music. For “The Quiet Dance,” Leonard Bernstein’s “Some Other Time,” arranged by Bill Evans, was performed by Bowers. For “The Gettin,” it was music by Grammy Award-winning jazz artist Robert Glasper and his trio, who reimagine Max Roach’s “We Insist! Freedom Now Suite,” performed by Bowers, Brown III, Chris Smith and Charenee Wade. Abraham’s journey is hopeful, and with a splattering of samples from pop artists Common, Kanye West and Kendrick Lamar in “Absent Matter,” he captures Lamar’s words: “We gon be alright.”