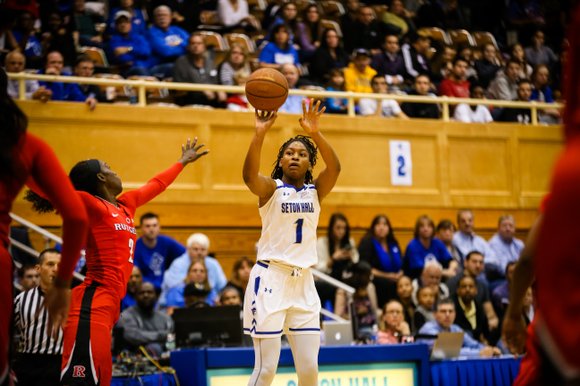 At 10-1 heading into Christmas break, the women’s basketball team of Seton Hall University had plenty to celebrate. Nationally ranked and with senior guard Tabatha Richardson-Smith named to the Naismith Trophy women’s early season watch list, the Pirates are experiencing a new normal. Despite losing four starters to graduation, this year’s team is determined to return to the NCAA Tournament.

“We got picked fifth [in the Big East pre-season poll] and were told, ‘You’re not going to be that good. You’ll be OK.’ We have two transfers—a fifth-year transfer from Florida State and a transfer who sat out last year and came with me from Iona. They said, ‘We might not be as acclaimed as the two [All-American honorable mention] players who graduated, but we’re every bit as good in a different way,’” said coach Anthony Bozzella, who is in his third season at Seton Hall.

One of the players shining this season is senior forward Tiffany Jones, a Manhattan native that entered Seton Hall last year after graduating from ASA College in Brooklyn and became the team’s standout first player off the bench. This year, she’s in the starting lineup and delivering game after game, averaging 11.1 points and 7.5 rebounds per game and second on the Pirates in blocks.

“Tiffany really has turned into a tremendous ambassador for our program. She’s great with our freshmen,” said Bozzella, adding that he sees Jones having a pro career overseas.

Bozzella said Richardson-Smith and Jones along with transfers Aleesha Powell and Shakena Richardson as well as post player Lubirdia Gordon have been on a mission. Richardson-Smith, who has WNBA aspirations, has a Big East championship as her goal. Powell and Richardson have also provided great leadership. “Also, great understanding of finding players, distributing the ball, defending at a high level,” said Bozzella. “We lead the Big East in points allowed [field goal percentage defense], which shows how good our defense really is.”

Heading into conference play, which the Pirates kick off Dec. 29, Seton Hall has the best record in the Big East. Bozzella anticipates a great rivalry with St. John’s University, which returned to the national rankings for the first time since February 2014.

“We have a lot of respect for each other, but it’s competitive,” said Bozzella. “It’s great for the game locally.”