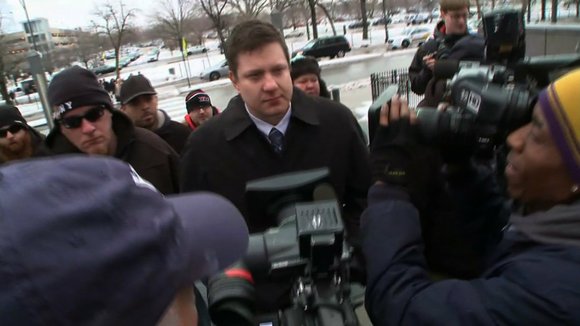 McDonald's October 2014 killing sparked intense protests and calls for the mayor to resign.

Protesters yelled at Van Dyke and called him names as he approached the courthouse Tuesday morning for his arraignment.

One person shouted, "You just couldn't wait to shoot a black man."

He faces six counts of first-degree murder and one count of official misconduct in the October 2014 shooting that was captured on police dashboard camera video. A freelance journalist sued to have the footage released, arguing it was a public record. Mayor Rahm Emanuel said he thought releasing it would jeopardize a federal probe of the case, but a judge found in the reporter's favor and the video became public in November 2015.

The video shows McDonald walking down the middle of the street. Police later said he held a four-inch knife in his hand. At least two squad cars are visible on the video, and McDonald can be seen walking away from officers, his back to them when he is shot 16 times.

Van Dyke had a history of complaints previous to McDonald's shooting. He was cleared in almost every case. The allegations mostly involve excessive force, and at least one complaint alleges he used a racial slur. There appear to have been no criminal proceedings against Van Dyke before he was charged in McDonald's death, but a jury did award a Chicago man $350,000 after determining Van Dyke employed excessive force during a traffic stop.

The uproar over McDonald's killing and last weekend's police shooting and killing of a Chicago grandmother and teenager have inflamed calls for Emanuel to resign, though there is no official process to remove him.

The family of the teenager killed recently has filed suit against the city Tuesday.

Emanual's office said this week he planned to cut short a vacation in Cuba and return to Chicago on Tuesday afternoon.

On December 1, in the days after the McDonald video was released, Emanuel announced that he had asked police Superintendent Garry McCarthy to resign, and McCarthy complied.

The mayor then described a new task force on law enforcement accountability that will review how the city trains and oversees its police officers. It will include five Chicagoans who have been leaders in the justice system. Chicago native and former Massachusetts Gov. Deval Patrick will be a senior adviser to the group, Emanuel said.

About a week later, U.S. Attorney General Loretta Lynch said that the Justice Department is investigating whether Chicago police have made a habit of violating the law or the U.S. Constitution in their policing.

"Trust in the Chicago Police Department is broken," Illinois Attorney General Lisa Madigan said in a statement. "Chicago cannot move ahead and rebuild trust between the police and the community without an outside, independent investigation into its police department to improve policing practices."