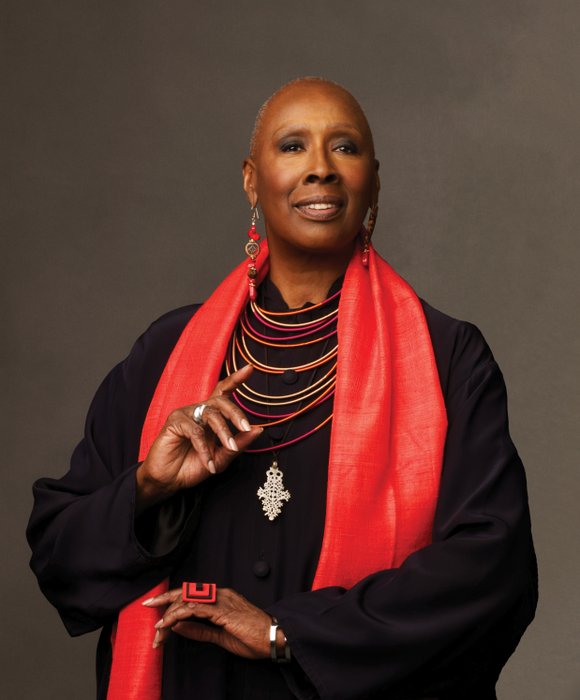 On New Year’s Eve, the Alvin Ailey American Dance Theater will celebrate with a 50th anniversary tribute to Artistic Director Emerita Judith Jamison, the program featuring a work she choreographed (“A Case of You”), an Ailey classic created on and identified with her (“Cry”) and an Ailey masterpiece she has left an indelible stamp on (“Revelations”).

It’s been five years since Jamison passed the baton to Artistic Director Robert Battle, but there are still frequent sightings of her around AAADT’s 55th Street headquarters and company performances. But now that she’s retired, interviews are not mandatory, so it is an honor for her to take time out of a busy schedule to chat with the Amsterdam News about life, dance and Ailey—both the man and the company, which are integral parts of her heart, her life and her legacy.

“I’ve been away five years, and its so wonderful watching the dancers, some of whom I hired, mature and stretch themselves. Robert is doing such a great job as artistic director. I knew he would. And the dancers are happy. When I go to a rehearsal, I can feel it, and audiences can see it in the way they interact with each other. Their enthusiasm is wonderful,” Jamison says with a smile.

Asked how she has been spending her time since relinquishing the reigns of the Ailey company, Jamison says she and AAADT are still connected at the hip. “I’ve been teaching, coaching and speaking. Dance is my life. I’ll always be a dancer. That’s what I am. Period. Everything else is icing on the cake. When I do get a chance to teach, coach or talk to young people, that is my joy. It just gives me joy and pleasure to share my gift.”

Jamison’s remarkable talent, regal bearing, commanding presence and accessibility made her virtually an instant success when she joined AAADT years ago. Ailey once said, “I respect and admire [Jamison] for her compassion and her beauty as a dancer. She has musicality, discipline and taste—marvelous taste. ... She is, of course, an extraordinarily gifted dancer. I love her, we all love her.”

That love reached new heights when she premiered Ailey’s “Cry.” Not only did Jamison receive rave reviews, but she appeared on numerous major magazine covers, starred in a Broadway show and performed with such ballet luminaries as Mikhail Baryshnikov. Her career was unprecedented for a modern dancer and was both indicative of the dance boom as it was of the AAADT’s unprecedented popularity. Ailey encouraged her to choreograph. She did, and in 1988 she established her own company, the Jamison Project. But not long afterwards, Ailey fell ill and handpicked Jamison, his muse, to carry on his vision. Since then, she has treated it like a sacred trust, and thanks in large part to her, Ailey’s dreams flourish and his legacy lives on.

On switching hats from dancer to choreographer to artistic director and beyond, Jamison says, “As artistic director, you’ve got 30 dancers trusting you to take care of their spirits, their souls and their minds. You trust them to sustain a vision that came from another person—Alvin Ailey—who trusted you as a dancer with his soul, with his innermost feelings.”

Reminiscing about Ailey’s gift, “Cry,” a dance Jamison has passed on to a new generation of Ailey dancers the way one passes on family heirlooms, Jamison says, “The first thing I tell dancers when I come in to coach ‘Cry’ is, ‘Don’t imitate me because you can’t. You’re not supposed to. You’re supposed to be doing you.’ When they understand the weight of the work, not just spiritually but emotionally, it’s miraculous to see how they grow through it.”

Of course, Jamison’s own performances back in the day always made “Cry” look like a walk in the park, but she reminds us the three-part solo might look easy, but it is very difficult. “Usually with ‘Cry,’ I teach the last section first. You’ve got to have a lot of stamina for that. The second section is extremely difficult. The first section is very difficult. You know, it doesn’t look technically difficult, but it’s very hard to do. Usually when you teach the last section, dancers fall flat on the floor exhausted just from one section.” Today she has nothing but praise for the dancers who have picked up the mantle.

Speaking about the arc of her life, Jamison says, “Often I feel like I was just there and totally being guided. Always I’m thinking of Alvin. You can’t help it. You don’t even have to be in the theater. Alvin left a road map and we’re following it to this day … You know it will never be fully realized because it’s a constant spiral upwards, constantly going from one plateau to the next. It’s never finished. We accomplish some things, like the headquarters building on 55th and Ninth Avenue, but then there’s more. Then there’s more. It’s a never-ending artistic cycle. So we thank Mr. Ailey every day for that road map. He might have physically died, but you know we’re still living in the wake of his vision and his belief that dance could take you to other places and elevate your life and be a bridge between people.”

Jamison recalls a song whose lyrics she paraphrases to speak of her mentor, and even as she is about to be praised on New Year’s Eve, the works could apply to both him and her: “When the stars go out at night, you’ll still be burning so bright.” And thinking of Alvin Ailey, she says, “It’s so true. If the stars ever went out at night, Alvin’s star would still be there. It would be something we can always look to. … That is what AAADT Artistic Director Robert Battle and Associate Artistic Director Masazumi Chaya are doing even as they carve out their own path,” says Jamison. “And they’re doing a darn good job of it.”