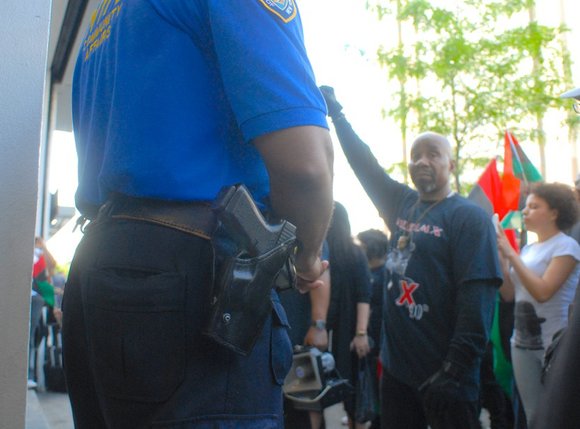 As we arrive at the cusp of a new year and say goodbye to the old, Black Americans remain in a quandary when it comes to the issue of police and community relations. While we are heartened to learn that a new report released by John Jay College of Criminal Justice indicates a reduction of arrests for felonies, misdemeanors, criminal summonses and, most significantly, stop-and-frisks between 2011 and 2014 in New York City, we are incensed by a systemic pattern of police abuse nationwide.

One of the pressing concerns facing the African-American community emerged last Saturday in Chicago when police were summoned to respond to a domestic disturbance and fatally shot a troubled young man and “accidentally killed” a mother of five.

When a family or individual is caught in the throes of a danger, the instinct is to call for help, but you don’t want a domestic problem to be exacerbated by someone being killed. This is often a lethal paradox for Black citizens when they call the police to intervene, and lethal is the operative word here.

Unfortunately, there is no alternative for an imperiled Black resident short of taking matters into their own hands, vis-a-vis the character in John Singleton’s film “Boyz n the Hood.” A Black community in need of police protection should not have to experience a remedy worse than the immediate danger.

There are no quick or easy answers to curbing excessive, unjustified police force. Here in New York City at the local level, some good measures have been advanced, particularly in limiting the assignment of rookie officers to the so-called Impact Zones. Pairing them with veteran officers—many of whom have good relations with the community—should help in offsetting the possibility of a wrongful death or mitigating an intense encounter.

From a national standpoint, we strongly endorsed the consent decrees that were promulgated by former Attorney General Eric Holder, who promised to enact lawsuits against police departments that refused to reform and put an end to the reports of abuse and excessive force. It is our hope that Attorney General Loretta Lynch will continue and expand this initiative with even greater pressure. And in some instances, more punitive means should be applied to officers who violate policing rules and regulations.

The dilemma that the Black community faces when it comes to policing should be at the top of President Barack Obama’s agenda as he enters his final year in the White House. He has the bully pulpit to give this matter a national issue. His weight and emphasis behind the Department of Justice’s plans to oversee the country’s law enforcement agencies will give the Black community—and other communities under duress—the assurance they need that things will be better when they find it absolutely necessary to call the police. And there’s no reason the current presidential candidates should not be calling for police reform.

We go into the new year with a fresh sense of optimism, knowing that things will not get better unless we remain ever vigilant and find ways to keep our elected officials and civic leaders keyed to our concerns. We are calling on them before we call the police, hoping that they understand the fierce urgency of the situation, and the need to intercede before the imminence of something more lethal.