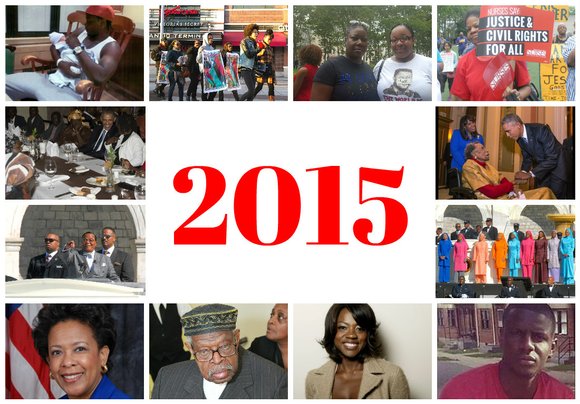 Andrew Cuomo is inaugurated for is second term as Governor of New York State. On the same day of his inauguration, his father, former Gov. Mario Cuomo, dies at age 82. Attorney Sanford Rubenstein is not charged in a case that accuses him of raping a board member of the Rev. Al Sharpton’s National Action Network. Sharpton severs all ties with the well-known attorney. Former U.S. Sen. Edward Brooke III of Massachusetts dies at age 95. He is the first African-American popularly elected to the United States Senate. More than 2,000 people are killed in a series of massacres in Baga, Nigeria by Boko Haram. Legendary gospel singer and pastor Andraé Crouch dies at age 72. Brooklyn D.A. Kenneth Thompson agrees to exonerate Derrick Hamilton, who was a wrongfully convicted and spent 21 years in prison. He is one of several inmates whose cases are linked to disgraced NYPD detective Louis Scarcella. The Rev. Jesse Jackson comes to New York City for his 18th annual Rainbow PUSH Wall Street Project, with the theme “Where Wall Street, Main Street & Silicon Valley Converge.” Haiti marks five years since the 2010 earthquake that killed more than 150,000 people on the Caribbean island. Mayor Bill de Blasio vetoes a bill that would criminalize the use of chokeholds by NYPD officers. The bill is proposed after the 2014 death of Eric Garner, who was killed by a police officer in an apparent chokehold. An explosive device is detonated at an NAACP office in Colorado Springs, Colo. The device causes minor damage but no injuries. The incident is seen as one of many anti-Black hate crimes around the country. Fox’s primetime musical drama “Empire” premieres, starring Terrence Howard and Taraji P. Henson. The show, which features a predominantly Black cast, is a ratings success, becoming the highest rated scripted program in the 2014-2015 television season. At the 73rd Annual Golden Globe Awards, rapper Common and singer John Legend win in the Best Original Song category for their song “Glory” from the historical film “Selma,” which recounts the Selma to Montgomery marches. The film is nominated for Best Picture at the Academy Awards but loses to “Birdman.” President Barack Obama proposes a plan to make community college free. New York City launches the new municipal ID program, which allows anyone to get a government-issued ID regardless of immigration status. New York State Assembly Speaker Sheldon Silver is arrested and resigns from his position amid federal corruption charges for large payments he received from a law firm that specializes in seeking reductions of New York City real-estate taxes. Domestic violence victim Marissa Alexander is released from prison in Jacksonville, Fla., after negotiating a plea deal. She was initially sentenced to 20 years for firing a warning shot to ward off her abusive husband in 2012, but her conviction was overturned. A blizzard hits the Northeast, dumping three feet of snow in some areas of the city.

Black History Month is celebrated with the theme “A Century of Black Life, History and Culture” commemorating 100 years since Carter G. Woodson, the father of Black History Month, founded the Association for the Study of African American Life and History. The New England Patriots beat the Seattle Seahawks 28-24 in Super Bowl XLIX at the University of Phoenix Stadium. NBC announces that “NBC Nightly News” host Brian Williams is suspended for six months after revelations that he lied about several stories. Black newsman Lester Holt is named as his replacement. Bronx Assemblyman Carl Heastie is elected Speaker if the New York State Assembly. He is the first African-American elected to the post. Community leader, Democratic Party Committeewoman and District Leader Theresa Freeman dies at age 62. NYPD officer Peter Liang is indicted for the 2014 fatal shooting of unarmed Black man Akai Gurley. Former State Senator and Senate Majority Leader Malcolm Smith is convicted in federal court of all the corruption charges he faced, including bribery and extortion. Jazz trumpeter Clark Terry dies at age 94. The 50th anniversary of the assassination of Malcolm X is commemorated. Several events take place across the city including a gathering at the Malcolm X and Dr. Betty Shabazz Education Center (formerly the Audubon Ballroom where Malcolm X was shot). The Department of Justice announces it will not file charges against George Zimmerman for killing unarmed Black 17-year-old Trayvon Martin in Sanford, Fla. in 2012. The NYPD reports no murders in New York City over a 12-day period for the first time in the city’s history. Civil rights legend Anne Moody dies at age 74.