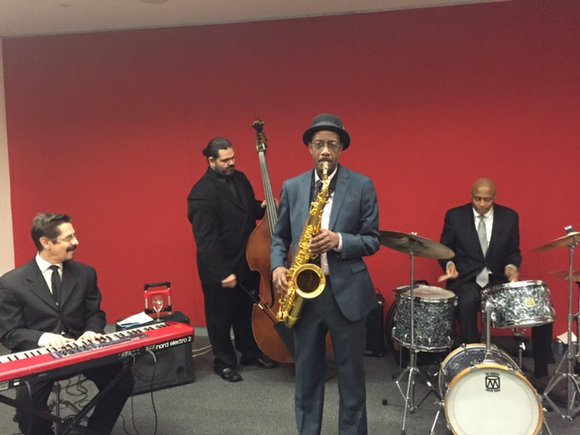 The 2015 Harlem Fine Arts Show, which takes place Feb. 12 through Feb. 15 at the Riverside Church in Harlem, recently kicked off with a preview reception at The New York Times Corporate Headquarters.

While many art lovers and participating artists were present, jazz enthusiasts gathered at the scene for the legendary photographer Chuck Stewart, who was being honored by Jazzmobile and receiving a special award from its executive director and CEO, Robin Bell-Stevens.

“I am not accustomed to this sort of thing, but it feels good,” said Stewart. “I am honored that people think so much of me and my work. I always try to capture my subjects in their most flattering pose of the moment.”

Stewart, a native Texan who has lived in New Jersey for many years, is the Art Blakey of jazz photography. Similar to how Blakey’s Jazz Messengers became a boot camp for aspiring young jazz musicians, under the tutelage of Stewart, generations of young photographers such as Frank Stewart (no relation), Hollis King, Grayson Dantzic and Hakim Mutlaq have become noted photographers.

Stewart’s photographs have appeared in Esquire, The New York Times, Ebony, Paris Match and “The Encyclopedia of Jazz” by Leonard Feather. In 2014, 25 of Stewart’s photographs documenting the recording of John Coltrane’s “A Love Supreme” were inducted into the Smithsonian.

With Patience Higgins and the Sugar Hill Quartet, featuring keyboardist Marcus Persiani, bassist Alex Hernandez and drummer Dave Gibson playing in the background, artist Bob Carter noted, “I love what the jazz musicians do. It makes it clear the arts have a common base. It’s all the same with different skills. Dizzy Gillespie’s music is a form of art.” Cliff Lee Plus Three also performed.

Jazzmobile will be the beneficiary of the Harlem Fine Arts Show’s opening night. Featured guests include the Danny Mixon Quartet, Solomon Hicks and Cliff Lee Plus Three. This is another event celebrating Jazzmobile’s 50th anniversary.

The sixth annual Harlem Fine Arts Show at the Riverside Church is the largest traveling African Diasporic art show in the United States. The show is a platform for artists and galleries to exhibit work whose seeds were inspired by the Harlem Renaissance.

Some of the artists participating are Leroy Campbell, Carole Joy Gellineau, Frank Frazier, Laura James and Verna Hart, a native of Harlem who was exposed to jazz at an early age. Hart’s work is a rhythmic flow that creates a movement of textured paint overlapping vibrant colors.

The show coincides with Black History Month and will feature the “Winston and Carolyn Lowe Lecture Series” and a youth empowerment day program. The show will also travel to Martha’s Vineyard, Washington, D.C., and Chicago.