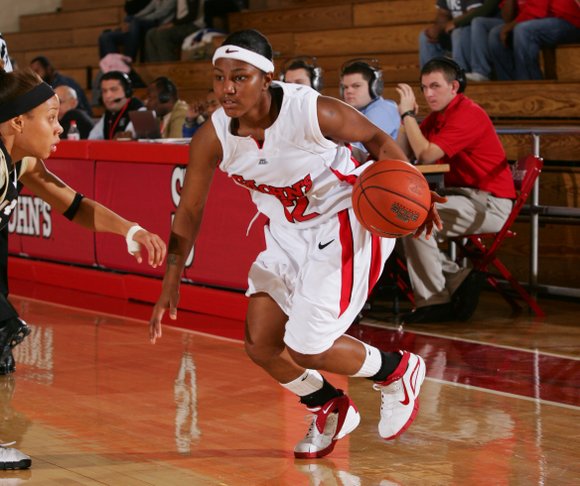 The women’s basketball team at Adelphi University is currently 19-2, with a top 10 Division II national ranking. These kinds of stats and national profile are new for the Panthers, but exploring uncharted territory is something that first-year assistant coach Kia Wright understands extremely well. In her collegiate career at St. John’s, Wright was a crucial part in putting St. John’s University on the national scene when, in her sophomore year, she led the Red Storm to the NCAA tournament for the first time in 17 years.

“The Adelphi coaching staff works very hard to make sure that the girls are in the best position to win,” said Wright, who previously coached boys’ middle school and high school basketball. “It makes it a lot easier when the girls are buying into what the coaches see for the program.”

“St. John’s wasn’t a team that was on the map,” said Wright, who graduated in 2008 with a degree in sports management. “My teammates and I took it upon ourselves to change that program around. To see how much of an impact we had on St. John’s to this day is a great feeling. I’m very proud of what St. John’s has become.

“That turnaround is doable. It’s a mindset,” she added. “To come at St. John’s and make my own name and then have others come behind that, that’s enough for me.”

Wright dreamed of playing professionally but was hampered by injuries, so she’s now intent on sharing her basketball knowledge as a coach. At Adelphi, her job entails a bit of everything, from recruiting to working on skills, as well as the players’ mental preparation.

“Off the court, I want to make sure they’re OK,” said Wright, whose family will join her on Feb. 21. “I want to use my gift to give back for the girls that need me the most.”