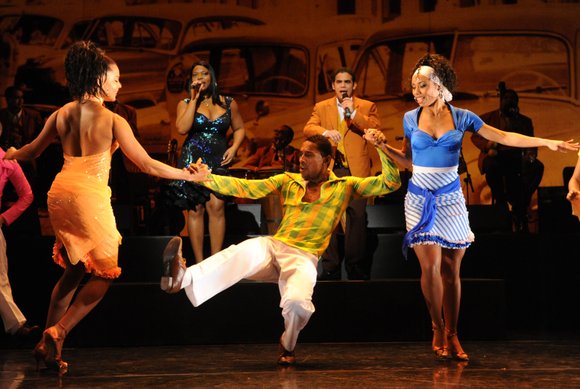 Cuban dance and music explode onto the stage at City Center Theater Feb. 18 through Feb. 22 when Ballet Rakatan, accompanied by the eight-piece Cuban son band Turquino kicks off its vibrant program, “Havana Rakatan,” which promises to generate enough heat to melt hearts and transport audiences to the sun-splashed streets of Havana.

Billed as a high-energy slice of Cuban culture, “Havana Rakatan” spans the rainbow of Cuba’s music and dance by embracing the rituals and rhythms of West African slaves, brought to the island to work the sugar cane fields from the mid-16th century until 1886; of its Spanish colonizers; its indigenous people; and a host of other cultural influences. Also on display are such compelling musical forms as son, salsa, mambo, rumba, cha-cha-cha and hip-hop.

While this trip is Ballet Rakatan’s first to the U.S., the dance company has enjoyed considerable success in other countries since it was founded in 2001 by dancer-choreographer Nilda Guerra. Now, thanks to the thaw in U.S.-Cuba relations instituted by President Barack Obama, the company promises to win more hearts and minds here.

Guerra says her production draws on the roots of Cuban culture, explaining, “We go from the folk dances of the Spanish settlers and African slaves to the kind of dance you see in Havana in the street, which expresses the freshness, the excitement of Cuban life today. Here, you see the basic stories at the root of all Cuban dance. There are dances of sexual attraction, dances of war and dances of celebration.”

A similar dedication to Cuba’s culture lives in the music of Turquino, the eight-piece son band founded in the early 1980s by students determined to preserve Cuba’s rich musical heritage. The musicians’ instruments include not only bongos and horns but also such traditional instruments as the guiro, a hollow gourd and the tres guitar.

Together, Ballet Rakatan and Turquino are a presenter’s dream, according to Suzanne Walker of London’s Sadler’s Wells Theatre, who has featured them practically every year since first falling in love with them at a 2006 Edinburgh Festival. Walker, whose theater hosts an array of dance companies from ballet to hip-hop, says, “‘Havana Rakatan’ is probably our most successful show, and Nilda Guerra is a fantastic choreographer with a truly exciting company of energetic and vivacious dancers.” Chuckling, she adds, “Everything that we’re not in our English culture.” Walker insists New York City audiences are in for a treat.

Ballet Hispanico Artistic Director Eduardo Vilaro agreed, adding that for him, the thaw in U.S.-Cuba relations is an extraordinary opportunity for cultural exchange that will benefit both countries.

“I am a Cuban immigrant, “ Vilaro said recently. “I came here in 1969, when I was only 6 years old. Cuban dance was my lifeline to my culture. I remember my mother playing her music and getting me up to dance. Before I was a trained dancer, I was a salsa dancer. I knew my rumba, my conga, my mambo. It was engrained in me.”

Recently, Vilaro took Ballet Hispanico to Cuba. “It was my second time there. My first time was very difficult for my parents, so it took a long time before going back. I needed to honor their struggles and what they went through. Then we got to the point where it was OK. Dance was the impetus for that change. That’s what culture can do—bridge, reconnect and establish new points of departure.”

To explore that point, before the performance of Havana Rakatan, Vilaro will join American Ballet Theater’s Cuban-born ballerina Xiomara Reyes and Ben Rodriguez-Cubenas, a leader in Cuban arts advocacy, for a panel discussion, “U.S.-Cuba Policy: The Artist Perspective,” about the impact the recent thaw in U.S.-Cuba relations can have on the arts. After the panel, the curtain rises on Havana Rakatan and, as the saying goes, the proof is in the pudding.