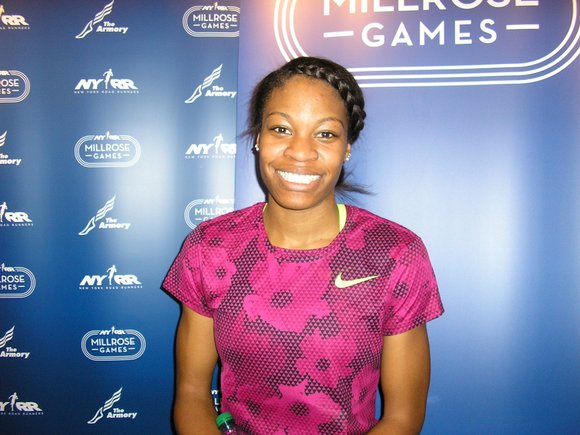 Olympic gold medalist Sanya Richards-Ross was one of the undisputed stars of the 108th NYRR Millrose Games, but the night belonged to Queens native Phyllis Francis, who ran away from the field in the women’s 400 meters, making her professional track debut. She admitted to some anxiety before the race.

“I told myself just go for it,” said Francis, who grew up running on the Armory track and competed in the Millrose Games during her high school days at Catherine McAuley High School. “It’s a little mind-blowing right now. … My coach said, ‘You might surprise yourself.’”

Another victor making a pro debut was Sharika Nelvis, who edged out Jasmin Stowers in the 60-meter hurdles.

“It was a good race. I have no complaints, not until I go and talk to my coach,” said Nelvis. “He’ll tell me all the problems I had. I was excited to be here. To get the win, I’m even more excited.”

First place in the 60-meter dash went to Murielle Ahoure, who, at 7.05, was .06 of a second faster than 2014 champion Michelle-Lee Ahye. The enthusiasm and proximity of the crowd inspired both runners.

“The race felt really good. I feel like I got out of the blocks properly, and that’s the key to the race,” said Ahoure, who celebrated her win by seeing the Broadway show “Wicked.” “It’s actually my first time running at the Millrose Games. It’s my first time in New York. I got to see Times Square for the first time, and that was quite exciting. I got to do some shopping and walking around and exploring, so I had a really good time.”

Sally Kipyego won the 3,000 meters, saying she wanted to enjoy the crowd and the atmosphere. Her main goal for the season is qualifying for the World Championships in Beijing, and this race was part of the preparation.

“This was a great win and a great confidence boost going into the season,” Kipyego said. “As athletes, [crowd energy] always makes our experience so much better.”