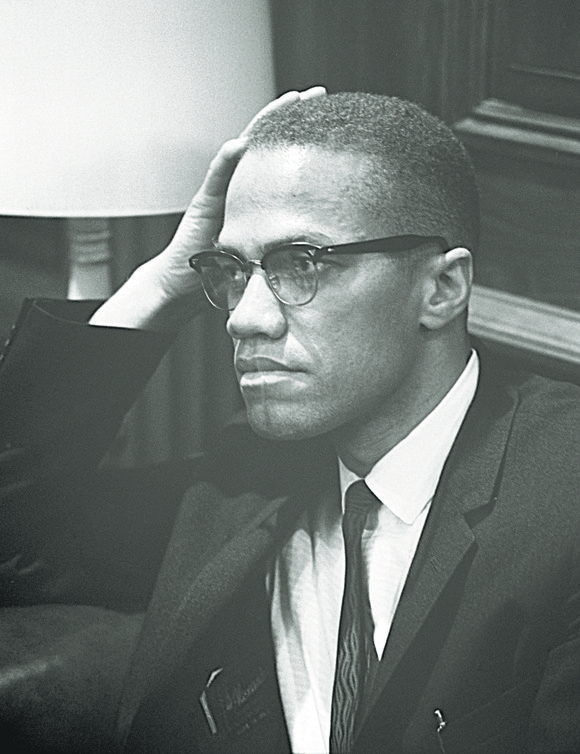 “Throughout the 50 years since the 1965 assassination of my father before my eyes, the resonance of his loving and engaging presence in our home and in my life directly still accompanies me strongly,” saID Attallah Shabazz, the eldest daughter of Malcolm X and Dr. Betty Shabazz.

Many events will commemorate the 50th anniversary of the Feb. 21, 1965, assassination of Malcolm X. From Brooklyn to the Bronx and dozens of venues in between, El-Hajj El Malik Shabazz will be honored, discussed, celebrated and mourned.

To once again “pay respect and honor the memory and legacy of the late human rights leader and international icon, El-Hajj Malik El-Shabazz, Malcolm X,” X Legacy and the daughters of Malcolm X are “proud to announce and participate in an international ‘Moment of Transition and Prayer,’” Saturday, Feb. 21 at 3:10 p.m., to mark the 50th anniversary of his death. “No matter where you live, where you are, just stop to recognize that moment of his transition,” Shabazz family attorney L. Londel McMillan told the Amsterdam News.

Malcolm X’s daughters, ambassador to Belize Attallah Shabazz, Qubilah Shabazz, Ilyasah Shabazz, Gamilah Shabazz, Malikah Shabazz and Malaak Shabazz, and their organization, X Legacy, shall host and support a series of events commemorating their late father throughout 2015. McMillan said that the daughters and their organization “are inviting members of the local, national and international community to commemorate this day, the 50th anniversary of Malcolm X’s death, by honoring his life’s work, ideals and the principles he stood for and championed: namely, his dedication to the struggle for justice, freedom, dignity, family, self help and the appreciation of history and culture.”

But as the tristate area becomes awash with events, Malcolm X’s family is concerned about preserving the honest depiction of his legacy. They are wary of opportunists, who may think that X marks the spot for unwarranted personal financial gain. Hence, lawyer McMillan and the six daughters of Malcolm X and Dr. Betty Shabazz formed X Legacy, to protect the legacy, property rights and other legal rights.

“It’s wonderful that so many people want to be associated with Brother Malcolm X,” said McMillan. “However, to really respect him, you have to appreciate that his images, his papers, his intellectual property are owned by his children, whom he never had the chance to fully financially set up in a secure way because he was working so much for the liberation of our people.

“We want the community to support X Legacy, and X Legacy has a duty to support the community because that’s what Malcolm X stood for. I have undertaken to legally register under copyright and trademark law the legal rights of the family. People should respect that, similar to the way they respect the rights of Dr. Martin Luther King and other great leaders who have certain intellectual property rights. So all the producers of those T-shirts and posters and buttons that promote the very image of Malcolm now have to get permission from the family.

“If people are being paid and compensated off of the work of Malcolm X, they should fairly compensate the family in a reasonable way. If people are going to be inspired by his legacy to commercialize his importance, they should have enough decency to fairly contribute to the family, and to respect how those images and literary properties are presented to the public worldwide. They should live the legacy of Malcolm X rather than sell the legacy of Malcolm.

“There is such a void of leadership, and the few we do have, we are not supporting them effectively enough. Brother Malcolm’s life is a testimony in the need to fight for justice and fight against any domination of one man over another or one group of people over another. It is important that people look at his life as whom he really was, and see what they can take from that and apply it to the betterment of the community at large.”

The tributes have already begun. This week, numerous special programs and commemorative events will take place Feb. 21. In Harlem, the Malcolm X and Dr. Betty Shabazz Memorial and Educational Center, the former Audubon Ballroom, will host an annual program highlighting the ideals and life’s work of Malcolm X in the very location where he was martyred.

In Oakland, Calif., a Bay Area Unity Vigil and Prayer will commemorate the “50th Year Anniversary of the Martyrdom of Malcolm X.”

College students around the country will be organizing special remembrances of Malcolm X on their campuses, such as UC Berkeley, where a coalition of student groups will host a program entitled “From the Audubon to Ferguson: 50 Years Later, the Struggle Continues,” alongside an honorary tribute to Yuri Kochiyama.

Every May 19, people from the tristate area take a caravan of cars and school buses to Ferncliffe Cemetery in Ardsley, where Malcolm X and Dr. Betty Shabazz are interred in the same grave. This year marks the 90th birthday of Malcolm X. Many schoolchildren already make the pilgrimage, but this special year sees a worldwide commemoration with “International Malcolm X Day” to celebrate his life and legacy.

McMillan stated that there will be a series of events all yearlong, including conferences, performances and programs, where the Shabazz family and X Legacy will work with “community and world leaders, scholars, socially responsible business organizations and members from the global community.”

Ultimately, moving forward, the attorney, who also heads The Source magazine, said, with young people in mind, “We to need to frame Malcolm in the image that he truly was in the truth of his ideals and live his ideals, and apply them to the benefit of the community. Malcolm X stood for justice. He stood for self-esteem, self-awareness, self-help and fighting against those who have taught you that you are less than who you really are. It’s time to restart, reframe and rebuild. The first 50 years were painful and promising—promising because people began to understand who he really was—and there was a lot of work done by the Islamic community, the Pan-Africanist and Black Nationalist community, and the hip-hop community in particular. So the next 50 will go from pain and promise, to power and purpose.”