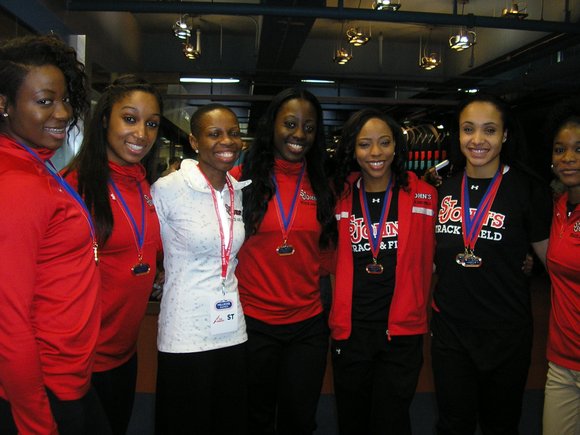 When the New York Liberty hit the hardwood at Madison Square Garden this summer, they will truly have the feel of a hometown team. In early February, the Liberty signed free agent Brooklyn native Tanisha Wright, an outstanding guard who has played 10 seasons with the Seattle Storm, winning a WNBA championship in 2010. Then last week, it was announced that Queens icon Tina Charles will be joined by Brooklyn’s Epiphanny Prince, who was acquired in a trade that sent Cappie Pondexter to her hometown Chicago Sky.

“To be able to come home and try to win the championship with my home team and do it in front of my family and friends is very exciting for me,” said Prince, 27, who made her Madison Square Garden debut at age 12, playing a halftime exhibition at a Knicks game, and won four PSAL titles with the Murry Bergtraum Lady Blazers. She’s played five seasons with the Chicago Sky, which went to the WNBA Finals last year.

Liberty senior vice president of business and basketball operations Kristin Bernert said that when Bill Laimbeer rejoined the team as head coach, they did a full evaluation of the roster with an eye toward long-range planning. Laimbeer said in Prince, the Liberty are getting a scorer with good basketball IQ who can handle the ball in a pick-and-role environment and who is an unselfish player.

“We’re building a basketball team for many years to come,” said Laimbeer, noting that several players are around the same age. “They’re all going to grow together and mesh as a unit with great chemistry.”

Prince, who is currently playing in Russia, is eager to be reunited with former Rutgers teammate Essence Carson. Laimbeer looks forward to seeing them playing together. He also is excited about Wright’s leadership skills. How well the plan comes together depends on the players, but hometown energy provides great fuel.

“When I was playing in the NBA, I thought one of the greatest things was for players to live in the town they played in,” Laimbeer said. “It’s difficult in a women’s league because they play all over the world. The next best thing would be to have players from the area that they’re playing in because there is a sense of ownership and a sense of pride.”