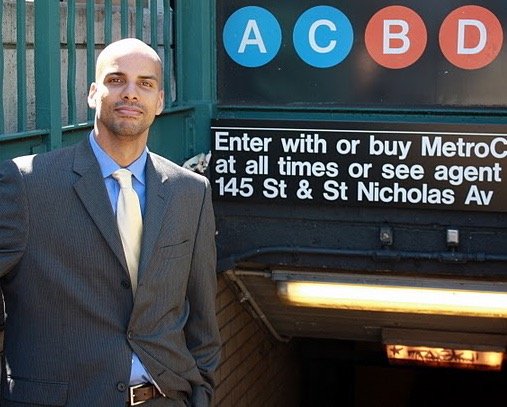 Joe Rogers Jr. is living out his dream. As a kid growing up in Lewiston, Maine, he was in awe of Harlem. He would devour every bit of knowledge he could about the Manhattan gem, especially its rich history. He promised himself that one day he would live there. Today, the 37-year-old has lived in his beloved Harlem for more than a decade, and he is on a mission to improve the educational opportunities available to uptown students.

But before founding TEN, Rogers thought that becoming a lawyer might be the way to go to generate real change in education. After graduating from the George Washington University and working in the Americorps program connecting GWU students with Washington, D.C., inner‑city youth, Rogers enrolled in law school. However, law school only lasted about a semester. He had a lightbulb moment that made him switch gears.

“I used to think that I could use the law to ‘fix’ public education,” said Rogers, who holds a master’s degree from Columbia University’s Teachers College in education leadership, policy and politics. “But then, even with some of the most promising laws on the books, like Brown v. Board of Education, many years later, many poor Black and Brown kids are still not getting their just due. For New York state, there are actual violations of the state constitution. The law is there. That’s when it occurred to me that I could best contribute by helping those who were shortchanged become aware of their educational rights and help them mobilize to attain their rights.”

TEN’s work is based upon four pillars: sharing information about educational opportunities, connecting people and organizations that are doing similar work (so as not to work in silos), organizing community efforts and direct service. One of the organization’s best-known projects is the Literacy Across Harlem Day, which takes place on the first of every month. Uptowners are encouraged to “rock their reads,” meaning carry around the book, magazine or newspaper that they are currently reading.

“It’s a very non-elitist way to participate,” said Rogers, a former New Visions for Public Schools staffer. “You don’t have to have a college degree or be an educator. You can grab a free newspaper from one of those stands. This is also inter-generational. Young and old are out here. We are developing reading activists.”

Another exciting part of TEN’s work is having middle and high school students from Harlem and Washington Heights spend a few days in Rogers’ native Maine to see how their semi-rural counterparts live and learn. All of the students ask each other questions and engage in thought-provoking conversations. The kids also visit farms, schools (including Rogers’ old middle school) and colleges.

TEN’s book drive has resulted in more than 8,000 book donations in two and a half years, and that’s just some of the work TEN is doing. Amazingly, TEN has no paid staffers, not even Rogers, who works part-time as a senior researcher and public engagement specialist at Teachers College. Between a core team of loyal volunteers, a steady flow of passionate event-based volunteers, donations and a network of other organizations, TEN has been able to stay afloat and effect change, even without a formal office space.

Rogers credits his 85-year-old grandmother LeViolet (affectionately known as Madea) for instilling in him a love of education. He said of her, “This is a woman who grew up in segregated Mississippi, walking several miles to and from school each day and getting hand-me-down books from the white schools. She always says, ‘People can take just about everything from you, but they can’t take what’s up here [in your head],’ and I’ve found that to be true.”