OMALIS ARE ‘HANGING BY A THREAD’ 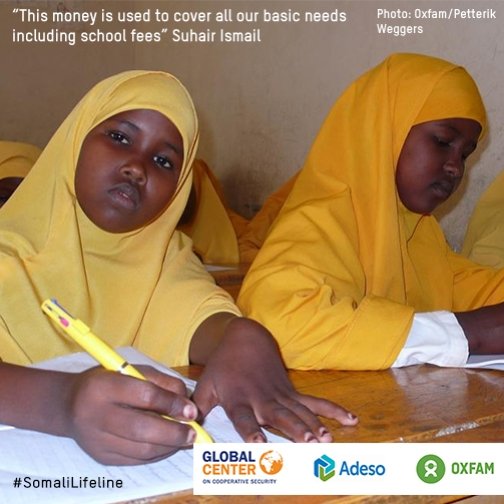 Feb. 23 (GIN)—After twin suicide bombings at a popular Mogadishu hotel last week that killed 25 and wounded 40, news reporters were seen swarming through the city, spotlighting the victims, the bombers, the motives and the official response.

This development left actor Barkhad Abdi, who played opposite Tom Hanks in the movie “Captain Phillips” and was making his first visit to Somalia since age 7, without the usual paparazzi following his every move.

Yet Abdi, a Goodwill Ambassador for Adeso, a Kenya-based development charity, was there to bring attention to the plight of ordinary Somalis, facing life without a lifeline since the shutdown of money transfers that have been key in rebuilding Somali lives.

The money—more than a quarter of a billion dollars from the U.S. alone—comes from families in the diaspora, the charity Oxfam America reports.

“The small amounts of money that members of the Somali diaspora send their loved ones comprise Somalia’s most important source of revenue,” wrote Oxfam America on its website. “Remittances to Somalia represent between 25 and 45 percent of its economy and are greater than humanitarian aid, development aid and foreign direct investment combined. Remittances empower women and help give young men alternatives to fighting in armed groups. The money is the country’s lifeline.”

Because Somalia lacks a formal banking system, small companies were established, run by money transfer operators who could safely and legally deliver money to relatives and friends in Somalia. These companies used bank accounts to wire money, but most of those banks have shut down, including the California-based Merchants Bank just last month.

Most money wired to Somalia originates in the U.S.

Opinion writer, George Monbiot, raged, “The U.S. Office of the Comptroller of the Currency, which triggered the bank closings, is the world’s most powerful terrorist recruiting sergeant … Its decision to cause a humanitarian catastrophe in one of the poorest, most troubled places on Earth could resonate around the world for decades.”

“During the 2011 famine in Somalia, British Somalis saved hundreds of thousands of lives by remitting money, ” he wrote in The Guardian newspaper. “Government aid agencies then used the same informal banking system—the hawala—to send money to 1.5 million people, saving hundreds of thousands more. Today, roughly 3 million of Somalia’s 7 million people are short of food. Shut off the funds and the results are likely to be terrible.”

As Abdi toured his country of birth to see the impact of diaspora dollars, he came in for a shock.

“Based on what you hear on the news, I expected to see a shattered country,” Abdi recalled from his visit. “But instead I saw a place full of resilience, entrepreneurship and hope. When I was in Somalia, I didn’t just see conflict, drought and hunger. I saw people building a better future for themselves.”

Hawala is one of Africa’s great success stories, wrote Monbiot. “But it can’t work unless banks in donor nations are permitted to transfer funds to Somalia.”

The newly released report, “Hanging on by a Thread,” by Oxfam, Adeso and the Global Center on Cooperative Security, can be found on the Oxfam website, www.oxfam.org.