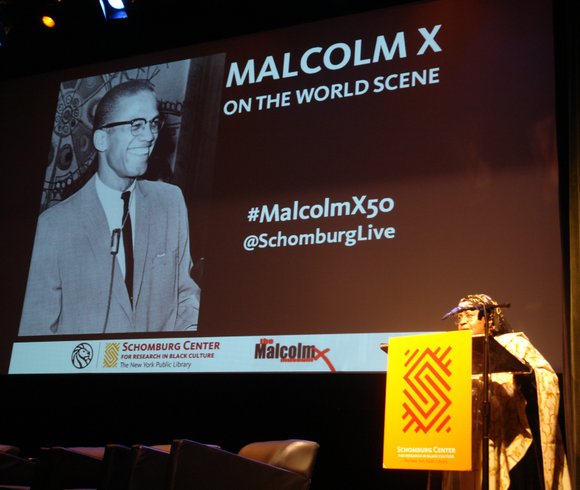 Several hundred admirers attended the Malcolm X and Dr. Betty Shabazz Memorial and Education Center in Washington Heights last Saturday afternoon to acknowledge five decades since the assassination of one of Harlem’s historic figures. Formerly known as the Audubon Ballroom, it is the same location where, on the frigid Sunday afternoon of Feb. 21, 1965, five cold-blooded assassins brazenly shot Malcolm X on stage, in front of his pregnant wife, Betty, and four young daughters, shortly after he greeted the audience of approximately 400 with, “As-salaam-alaikum!”

Festivities began with drumming and the singing of the Black national anthem, “Lift Every Voice and Sing.” Several activists, comrades and politicians paid their respects, as a blue light shined on the spot where Malcolm was gunned down.

“Thank you for joining us to commemorate the transition of El-Hajj Malik El-Shabazz, Malcolm X,” said master of ceremonies Ty Jones. “Although he was martyred only a few feet from where we strand, 50 years ago today, he has risen to become one of the most important and iconic figures in history, as a voice and symbol of courage standing against racism in all of its ugly forms and standing for justice and integrity for all, bar none. Few had the courage to speak unapologetically. We are here to remember our Black shining prince who knowingly sacrificed his life so we could live in a better country, and world, than the one he helped to change.” 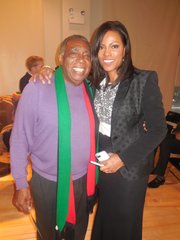 “Those of us in the movement refer to this year, 2015, as the year of 50/90, because 50 years ago today, our brother, our leader, was martyred,” he stated. “But if he had lived, this coming May, he would be 90 years old. Malcolm’s legacy is reaching out now, decade after decade, influencing the younger generation of this day and time to live like him.”

Malcolm and Betty’s third daughter, Ilyasah, said her sisters Malaak and Quibiallah were assisting in a Haiti refugee camp. She added, “I want to thank everybody for being here and keeping Malcolm alive.”

She then conducted a moment of silence at approximately 3:15 p.m., as the capacity crowd stood and held hands. “This was around the time my father was brutally assassinated, martyred, in this room,” she said.

A. Peter Bailey, an original member of Malcolm’s Organization of Afro-American Unity, followed by sharing a personal memoir.

“I’m going to read a letter by Brother Malcolm to Brother Earl Grant [Malcolm’s comrade], and it’s very important because it shows Brother Malcolm, the human being, a warm brother, as well as a trusting friend,” Bailey said.

He read, “My dear brother … I was very pleased to hear from you, especially to learn that you are expecting a new addition to your family, this is a real blessing.”

Ebony magazine editor, Jamilah Lemieux revealed, “One of our great editors, Hans Massaquoi, had the distinct privilege of interviewing Brother Malcolm five months before he would be martyred [September 1964 issue]. It means a lot to stand before you today because Malcolm was willing to give his life to, and for, us.”

Buses leave this May 19 from 126th Street and Seventh Avenue, at 10 a.m. for the annual pilgrimage to Malcolm and Betty’s gravesite in Ferncliff Cemetery.