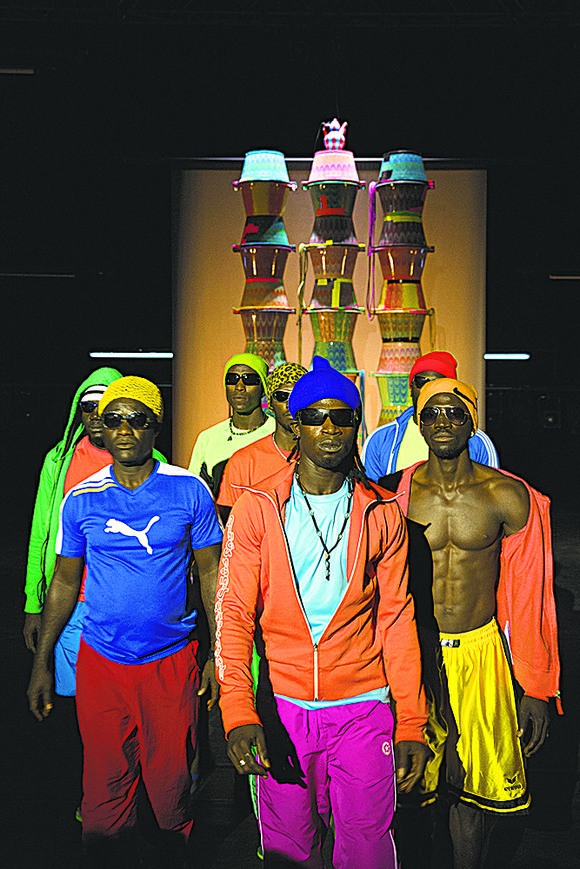 Full disclosure, choreographer Robyn Orlin is a white South African and her recent work, “At the same time we were pointing a finger at you, we realized we were pointing three at ourselves,” at Peak Performances (Jan. 24 through Feb. 1), was performed by eight Black Senegalese men from Compagnie Jant-Bi. The men work year-round under Senegalese artistic director Germaine Acogny.

Both are renowned and well-lauded contemporary African choreographers. In fact, critics consider Orlin “one of South Africa's most controversial and provocative choreographers” and Acogny “the mother of modern African dance.” After a long-standing invitation from Acogny to develop a work with Compagnie Jant-Bi, “in 2014 it all came to fruition,” said Orlin. One thing is for certain—both have geared their works toward telling and making real the many stories of traditional Africa through dance with a decided twist. 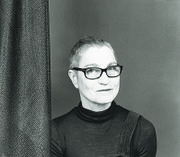 At the same time, the result of their coming together proved a sound meeting of the minds and well worth the wait. The men of Jant-Bi embraced Orlin’s direction and took it further. In “At the same time,” there is a lot going on. Colorful plastic buckets (which, from afar, look like decorative wicker) hang from the ceiling like a piece of art. These buckets morph into a vessel for water, an animal’s tail, the spirit Egungun, a platform to sing or dance from and more. Characters also come and go, with costume changes that move equally fast.

The flip-flop dance and song at the beginning is especially funny. In this slap fest, they clank them on the floor, on their bodies and other surfaces to get rid of the many “bad spirits” in the theater. “The theater is full of bad spirits … it will take a while,” writes Orlin in one of her frequent text messages displayed on a screen. This was just one way that Orlin introduced African tradition, the other is creating a community.

In its entirety, the work is based on the Senegalese tradition of the “Faux Lion,” a ceremonial rite designed to engender bravery in children. The men know no boundaries and become the people in the ceremony, and invite the audience to be a part of their staged reality. For instance, they make their way from the stage to the audience from the beginning, then again and again until the end, climbing from one seat to the other. At times, a performer’s crotch would hover just over an oft repulsed audience member’s head during the delivery of words or song.

Never mind though, those who gave in from the beginning when asked and directed to “touch” let them touch an arm, a shoulder or a head. Some went along for the ride. Orlin brings the audience into the work and into the community. They get to vote on whether to “eat” or “let go” an audience member brought to the stage as Mickey Mouse (they put a paper bag over his head with Mickey’s face); they whoop, chuckle or sing along when Orlin and company give a wink to reggae music, Michael Jackson, dancing the “nay-nay” or the “dougie” and even New Jersey Gov. Chris Christie.

Especially heart-warming were the intimate stories of each dancer and how they came to dance. Each danced story is real, and here. Tradition meets and blends well with contemporary movement cannons. The performers were Mamadou Balde, Adelinou Dasylva, Hans Peter Diop Ibaghino, Claude Marius Gomis, Mohamed Abdoulaye Kane, Aliou Ndoye, Tchebe Bertrand Saky and Khalifa Ababacar Top. The very elegant Acogny appears on film like an oracle at the beginning and then again at the end, beckoning them to come and follow.