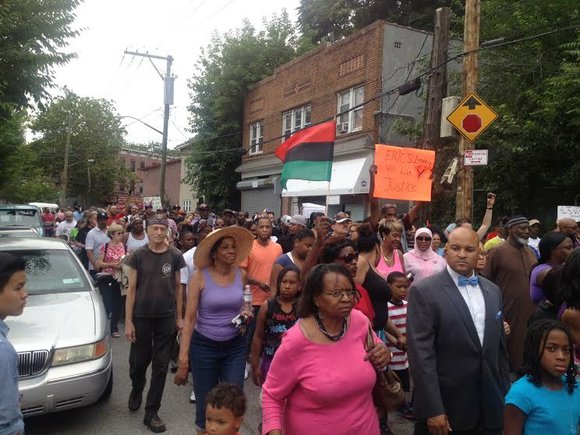 Demonstrators take to the streets against police violence. Bill Moore

NYPD officers turning their backs on Mayor Bill de Blasio, booing him at a graduation ceremony and charging that he is complicit in the shooting deaths of two city cops make Gotham look bad. But the animosity has much to do with union contracts and the re-election of the police union president.

“The heated police rhetoric has more to do with the stalled labor contract negotiations and the upcoming PBA union elections than any mayoral comments or police reform plans,” explained Marq Claxton, director of the Black Law Enforcement Alliance, to the AmNews. “With that being said, the police protestors not only turned their backs on the mayor, but they gave a symbolic middle finger to the calls for reform. They disrespected the memory of their fallen colleague, and they drew a clear line in the sand against the any talk or plans of a paradigm shift in police-community relations.”

De Blasio may not be the first mayor of New York City to clash with the NYPD, but his struggle for the soul of the five boroughs could be one for the record books.

According to recent reports, on the day that NYPD officers Rafael Ramos and Wenjian Liu were assassinated while sitting in their patrol car in Brooklyn, a memo allegedly sent by the Patrolmen’s Benevolent Association called for a slowdown of arrests unless officers didn’t have a choice.

“Absolutely NO enforcement action in the form of arrests and/or summonses is to be taken unless absolutely necessary,” read the memo. PBA President Pat Lynch denied that the memo was sent by the PBA, but the rhetoric expressed within the memo isn’t much different from what Lynch himself has said since the “Black Lives Matter” protests have taken over much of New York City.

In the immediate aftermath of the Ramos and Liu shooting, Lynch declared that de Blasio had “blood on his hands.” Other conservative politicians took a similar stance, including former New York City Mayor Rudolph Giuliani, who criticized not only de Blasio, but also the protesters, the Rev. Al Sharpton, President Barack Obama and soon to be former Attorney General Eric Holder. In 1992, mayoral candidate Giuliani led a violent police riot at City Hall against then Mayor David Dinkins.

This week, the New York Post continued to report on the alleged arrest slowdown by NYPD officers, stating that arrests in the five boroughs are down 66 percent, starting the week of Dec. 22, compared with the same period last year. Part of the decline in arrests can be traced to officers focusing less on low-level, petty crimes. However, there is a noticeable absence of patrolling officers in some stretches of the Bed-Stuy neighborhood where Ramos and Liu were gunned down.

At Ramos’ funeral, officers turned their backs on de Blasio, continuing the practice that started when the mayor went to visit the families of Ramos and Liu at Woodhull Medical Center. The demonstrators included Lynch and Sergeants Benevolent Association President Ed Mullins.

The New York Times has compared the recent actions by police to the behavior of petulant children not getting what they want all the time. National Latino Officers Association President Anthony Miranda told the AmNews that although he has issues with de Blasio’s mayoral style, he’s not entirely happy with the behavior of the disrespectful officers, either.