Brooklyn DA to exonerate another man wrongfully convicted of murder 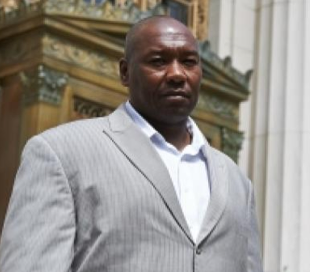 Monday, Jan. 5, Brooklyn District Attorney Kenneth Thompson agreed to exonerate Derrick Hamilton, a man who was wrongfully convicted of murder and spent 21 years in prison. Hamilton is one of several men whose murder convictions are being questioned after investigators linked their cases to disgraced NYPD detective Louis Scarcella.

“Wrongful convictions ultimately destroy the lives of the people who are wrongfully convicted, as well as their families, and also do great damage to the integrity of the justice system,” Thompson told the AmNews. “The people of Brooklyn elected me to ensure that justice is done and that is what my decision to vacate Derrick Hamilton’s conviction reflects. The Conviction Review Unit carefully analyzed the scene of the crime and scientifically and medically concluded that the sole eyewitness’ account was unreliable.”

“It feels great man,” Hamilton said Monday evening at the Brooklyn DA’s office, where he received the news. “It’s been a long time coming and I mean I feel great, very, very relieved to be standing here and declared innocent.”

Hamilton was convicted of the 1991 shooting death of Nathaniel Cash. He has always contended that he was in New Haven, Conn., at the time of the Bed-Stuy murder. He was paroled in 2011, but it is only now that his name is being cleared and his record officially expunged.

Scarcella, whose career has come under intense scrutiny recently for shoddy police work in homicide cases, handled the Hamilton case, in which the girlfriend of the victim reportedly recanted her testimony before Hamilton’s sentencing.

The DA began investigating dozens of Scarcella’s cases after it was discovered that he falsified evidence and coerced witnesses. Scarcella has denied any wrongdoing.

Thompson says he told Hamilton his office will go before a judge Friday to have his conviction overturned.

Coming on the heels of the recent reversal, less than three months ago, of David McCallum’s kidnapping and murder conviction, Thompson continues to push ahead, aware that others are still denied justice.

“We have about 100 more of these cases to look at. … What many people don’t realize is that we are standing by most of the cases we’ve reviewed, but there have been some that we have concluded men were wrongfully convicted, including Derrick Hamilton.”

Last May, three other men had their records cleared in separate cases investigated by Scarcella. Thompson has overturned 11 convictions since taking office. Hamilton called him an “angel.”

“This is not something that I relish, this is something that I feel obligated to do … the people of Brooklyn elected me to do justice and that is what this is all about,” Thompson replied when told of Hamilton’s praise for him. “We are protecting people from all types of crimes, but we also have to make sure that our criminal justice system is fair toward all.”