Past, present and future celebrated at Maggie Dixon Classic 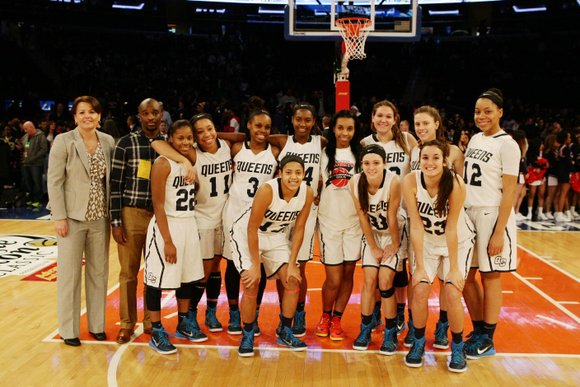 Tears filled the eyes of Julie Dixon Silva after an on-court presentation to the Maggie Dixon Foundation by Madison Square Garden. This women’s college basketball double header, held for the eighth time at the Garden this past Sunday, is a celebration, but it also marks the Dixon family’s loss. Every year, a heart health fair is held in conjunction with the event to prevent tragedies such as Dixon’s death, which came at the age of 28 because an undiagnosed heart condition.

Dixon was a ferocious advocate for the game, so it seems fitting that her name is associated with an event that honored the first women’s college game ever played at the Garden. Queens College alumnae, as well as former coach Lucille Kyvallos, were on hand to see Queens defeat Immaculata 76-60 in the opening game.

“It’s surreal,” said Queens alumna Dr. Sharon Beverly, assistant vice president for student affairs and executive director of athletics and recreation at the College of New Jersey, who said being part of the first women’s college game at MSG has given her a strong sense of equity.

“We have endured,” said Gail Marquis.

“We could not be more thrilled for our alumnae that they were recognized today for what they accomplished not only at Queens College, but for what they’ve done for women’s basketball,” said Queens coach Bet Naumovski. “What I said to [the players] beforehand is we have this opportunity because of what our alumnae accomplished 40 years ago, but I wanted today to be about them and their experience.”

Queens guard and forward Madison Rowland barely slept the night before the game, but she performed in stunning fashion, scoring 28 points and pulling down 11 rebounds. “It was getting revenge for 40 years ago,” said Rowland of the Knights’ close loss to the Mighty Macs in 1975.

In the second game of the day, Connecticut downed St. John’s 70-64. Although playing at “The World’s Most Famous Arena” isn’t new to the Red Storm, the excitement of it never gets old.

“It’s a great opportunity to be able, as women, to be on this court,” said guard Danaejah Grant. Coach Joe Tartamella agreed.

“You watch the excitement around the game; you see the people in the stands,” said Tartamella. “It was a great day to celebrate women’s basketball.”