The Changing Face of Harlem 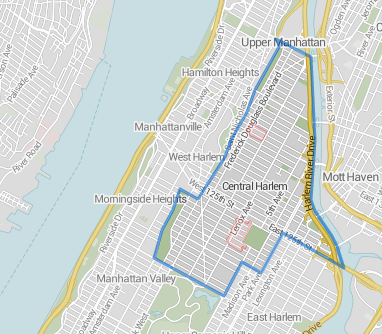 It was a time of change and progress. African Americans found a place where they could build a community and open businesses, away from the prevailing racism that existed throughout the country. People of African descent migrated from the Caribbean as well as Paris in the hopes of something better. Writers, painters, and artists all converged in one place, Harlem. It was the 1920s and the beginning of the Harlem Renaissance.

Harlem is now regarded as a cultural center for African Americans throughout the world, and one of New York City’s top tourist attractions with many museums and theaters including the famous Apollo Theater. Harlem has a long history as a center for arts, culture and social and political activism.

Harlem was, and is, a predominantly black neighborhood. In the 1950s Harlem’s black population reached its peak numbers at 98 percent. However, the outstanding amount of social and physical change it has witnessed over the past few decades threatens to change the face of Harlem, as we know it.

Central Harlem, defined as Manhattan Community District 10, is comprised of 1.5 square miles of flat land stretching from north of 110th Street between Fifth and St. Nicholas Avenues to 155th Street and Harlem River Drive. According to the 2010 Census Data, Central Harlem has a population of approximately 118,000, an increase of about 16,204 new residents over the past twenty years. The majority of these residents are non-Hispanic whites. The 1990 census counted only 1,511 whites in central Harlem. By 2000, there were 2,189. The latest count, in 2010, recorded nearly 11,050 whites.

This increasing wave of gentrification that has such an increasingly diverse crowd calling the neighborhood their home is due to the development of hundreds of vacant lots, abandoned in the 1970s, as well as new residential buildings.

“This place was vacated,” said Howard Dodson, director of Harlem’s Schomburg Center for Research in Black Culture. “Gentrification is about displacement.”

With gentrification comes higher rent. As the cost of living increases those who cannot afford to live in the place they called home are replaced by those who earn more. The median income of central Harlem has seen a 6.0% increase from 2007 to 2012 reported wnyc.org.

These figures do not mean that the residents of Harlem are earning more, they demonstrate that the influx of non-Hispanic whites to Harlem earn higher incomes than those being displaced.

The U.S Census reported a total of 47,054 housing units in 1990 with only 8,459 new units being constructed by 2010. This is not enough to accommodate the 16,204 new residents that have moved to Central Harlem during this time, demonstrating the displacement of lower income residents.

Due to the lack of affordable housing in Harlem those being displaced, primarily black residents, have had to move to other boroughs such the Bronx. Affordable housing is defined as rent below 25 percent of a person’s annual income. For a household to afford living in Harlem, they would need to make $100,800 annually.

Current market rates keep increasing making living in Harlem unaffordable for the average Harlem resident as more and more condominiums and brownstones are being sold. For example the residential building constructed as part of The Africa Center on 110th Street and Fifth Avenue has 114 units with an average selling price of $2,627,700.

A report by Manhattan Community District states that Central Harlem was not and is not capable of handling this rapid influx of people. Services like sanitation and pest control have suffered. Sanitation staff cannot keep up with the additional waste tonnage.

Area residents, churches and other community organizations continuously file complaints with the city about improper waste removal, which is usually left out on Sundays.

“It’s garbage everywhere, to many people all the time,” said Graciela Velez, 71, a long time Harlem resident. “My street was always clean before. I have been here for over forty years. Now I worry about bed bugs and rats because always garbage.”

Due to drastic cuts made by the Department of Health there are currently only two Health Inspectors for the entire borough of Manhattan making the rodent problem in residential and commercial areas intolerable.

While gentrification does bring many changes aesthetically to the make-up of a neighborhood a deeper look reveals that those who lived in the neighborhood long before are the ones who suffer. Many new black owned businesses in central Harlem do not cater to its former residents. Establishments such as Red Rooster on 126th Street and Lenox Avenue and 67 Orange St. on 113th Street serve Harlem’s high rollers and new higher income earners.

While central Harlem is still a cultural hub for African Americans and Black people of many descents, the day when it will no longer be a Black neighborhood is soon approaching.