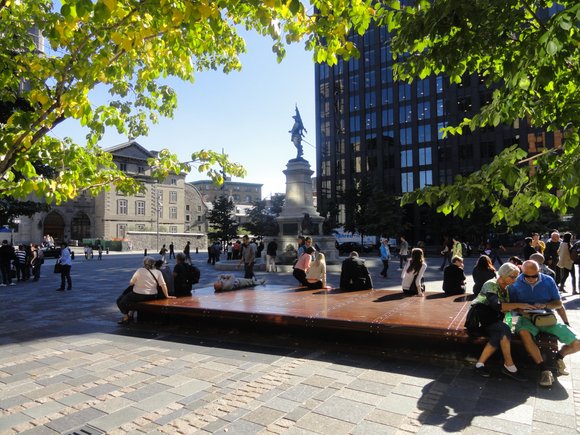 Montreal has been described as “a lush mix of North American swagger and Euro-cool.” (Montreal) Lysa Allman-Baldwin

In some ways, the year flowed along smoothly, and in others, it just flew by. And here we are, the beginning of the new year, taking time to reflect on what has transpired and to count our blessings, and to set our intentions, goals and dreams for the future.

In terms of travel, I have a great deal of gratitude to express for the many wonderful experiences I had over the past year. From outstanding restaurants to soulful musical performances, amazing accommodations, outstanding people, awe-inspiring outdoor recreation and backdrops, unique attractions and more, my heart is full and I’m hungry for more!

But before I delve into this year’s (already starting to fill up) travel calendar, I wanted to share a little snapshot of 2014.

The quaint town of Hannibal, located in northeast Missouri, just a stone’s throw over the Mississippi River from Illinois, is not only the home of Mark Twain but also the home of the Titanic’s “Unsinkable Molly Brown” and Jim, the central slave character in “The Adventures of Huck Finn.”

Philadelphia, “The City of Brotherly Love,” considered to be the most European city in America, is one of the greatest cities in the country. The city is chock full of historic sites and attractions relative to the birth of our nation, as well as world-class museums, performing arts entities, gastronomy and other sites and attractions of global and Afrocentric interest.

Moving on up the coast to Santa Barbara, dubbed “The American Riviera,” we found a spectacular gem along the California coast awash in Native American and Spanish history, coupled with iconic landmarks, a wealth of outdoor attractions, an expansive wine and food culture and an outstanding “glamping” experience.

Continuing our journey even further north, we arrived in Carmel, situated along California’s Central Coast region 120 miles south of San Francisco. This spectacular, incorporated square-mile (with only 3,900 full-time residents) vacation gem is eco-friendly, encompasses a planned and pedestrian friendly downtown, has no formal street addresses and has plenty of fantastic accommodations, culinary offerings (no chain establishments!), unspoiled beaches and parks and outstanding arts and culture.

Just a quick hop five miles up the road and you’ll arrive at Monterey and Moss Beach. Native American, Mexican and Spanish history form the backbone here, and visitors today will find an intriguing, delightful and unbelievable array of historic sites, attractions, recreational activities and a great deal more, uniquely combined to make the area one of the nation’s most popular tourist destinations.

Oakland’s reputation has come a long way in recent years, earning it outstanding accolades, including the “No. 5 Place to Visit in the World.” Its downtown, including Chinatown, Old Oakland and Jack London Square, are among America’s “Top 12 Art Places for 2013,” and the city was also named “the Most Exciting City in the U.S.” Today, its ethnic diversity and accompanying enterprises are beautifully and deeply infused into every nook and cranny of the geographic, social, economic, educational, tourism and other landscapes here.

The Quebec region of Canada is awash with vibrant metropolitan cities, quaint towns, diverse geographic landscape, and warm and welcoming people. My sojourns there last year included a day in Montreal and four days of spa-themed adventures in the Lanaudiere Region.

“America’s Best/Greatest Main Streets,” “Best Midwest Food Towns, “10 Coolest Cities in the Midwest,” “Top 10 College Towns” and “Most Walkable Cities.” These are just the beginning of the accolades bestowed upon Ann Arbor, a delightful small town located only about 40 miles from downtown Detroit.

Downtown is the heart and soul of the city, with a great deal of big city sophistication without the rat race ambiance, and peppered with oodles of noteworthy diversions encompassing everything from presidential and automotive history to the performing arts, cultural attractions, college sports, gastronomic excellence and unique, non-chain, distinctive shops, bookstores and the like.

When people think of traveling to New York, New York City or its boroughs come to mind, but Buffalo, located in the far west region of the state, along the shore of Lake Erie and the bank of Niagara River, is definitely worth the journey. From river history to early African-American influences, Niagara Falls, a wealth of art and culture and more, Buffalo is much more than the home of the iconic Buffalo wings.

Lysa Allman Baldwin is a freelance writer and the publisher and editor of Amazing Escapades, offering “Adventures for the Mind, Bod and Belly” (www.amazingescapades.com).