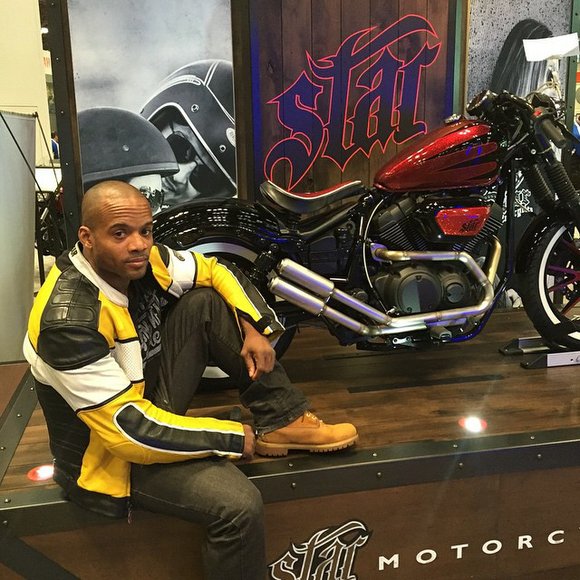 When 40-year-old graphic designer Ralph Gilmore was growing up in Harlem, he was exposed to limited career options.

“You either became a ball player, went to school to be a lawyer or doctor or something like that or you sold drugs. My father would have kicked my butt if I sold drugs, so I knew I couldn’t do that,” said Gilmore.

So Gilmore did what a lot of people do. He got a job that he found tolerable but unfulfilling. After earning a bachelor’s degree from Monroe College, he became an accountant.

“I didn’t like math, but I was good at it, so I chose accounting. I was doing accounting for 14 years. The last few years, I was getting burnt out. I had a creative side I wanted to do something with,” said Gilmore.

Back then, Gilmore’s daughter was not quite 5 years old, and he found himself bringing her to the office with him during his valuable weekend time with her.

“I was regularly working 12- to 13-hour days and taking my daughter into the office with me just to satisfy my boss. I knew I needed something else,” said the Bronx resident.

Initially, Gilmore thought he wanted to become a CPA, and he took the first two parts of the exam. But eventually he decided to feed his creative desires. In 2009, he founded Orange Moonwerks, an art studio that is also a graphic design and brand apparel company. “I planned out my exit strategy for about a year before I took the entrepreneurial plunge. Now, I freelance with different for-profit and nonprofit companies,” said Gilmore.

Today, Gilmore has primary custody of his now 12-year-old daughter, and he takes full advantage of his freelance flexibility. “It’s definitely great to be able to work from home, so I can schedule what I need to do around her needs and spend as much quality time with her as possible. I work out at the gym two hours a day, five days a week, and, of course, I like to have my personal time, too. Haven’t been on a date in a while, but whenever that happens, my mom and sister help me out. I’m fortunate to have a strong support system,” said Gilmore, a motorcycle enthusiast who is working toward publishing a graphic novel and an art book by the end of the year.

Affectionately known as the “Mayor of Harlem,” Gilmore’s affable demeanor, easy smile and long roots in the neighborhood make walking down the street a bit of a red-carpet experience. Every few steps, there’s a dap, a “Hey Ralph!” or a hearty hug from someone he knows. “I just try to be good to people and genuinely connect with people,” said Gilmore of his local celebrity status.

His desire to connect with people extends to his online communications as well. Gilmore often shares inspirational quotes and articles with his 9,000 Twitter followers (@orangemoonwerks) and his Instagram and Facebook friends. “I believe in the power of social media when it comes to business. You never know who’s reading your stuff or who’s watching you,” said Gilmore, who has been told more than once that he is a role model on- and offline.

The self-taught graphic designer also finds time to hone his craft. “I never wanted to pigeonhole myself in graphic design. I wanted to be able to do five or six things great instead of 10 things well. My focus is logo, web, comic and T-shirt design and writing. I go to comic conventions, book stores, art museums and galleries in order to stay motivated and aware of the industry,” said Gilmore, an ardent fan of legendary artist and entrepreneur Jim Lee.

Check out Gilmore’s work at www.orangemoonwerks.com.