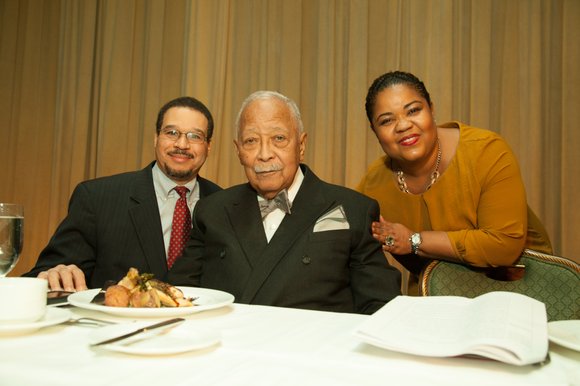 While reflecting on the legacy of King, Dinkins shared the following bit of wisdom: “It’s important to recognize that we do not stand alone when standing up. I have been fortunate to have received the support and encouragement of many good people throughout and beyond my life in public service. Not one of us managed to get to where we are without the help of those who came before us.

“We say that everybody stands on somebody’s shoulders, and by that, we generally mean people like Dr. King, Harriet Tubman, Malcolm X, Sojourner Truth, Rosa Parks and my personal hero, the late Percy Ellis Sutton, who ran his 1977 mayoral campaign with such grace and dignity that no one laughed when I announced my candidacy for mayor of New York City in 1989.”

Co-founder and president/CEO of the Golden Krust Bakery & Grill, Lowell Hawthorne was also on hand to receive an award of recognition. The beloved Jamaican eatery, which is headquartered in the Bronx, has 120 locations in nine states across the country.

“I want to salute this organization for being transformational and impactful to the business community in so many ways,” said Hawthorne, who noted that Golden Krust products are available in the school and penal systems throughout New York.

BAE President Danielle Moss Lee shared her thoughts about the nature and importance of BAE’s work. “Our days start at the crack of dawn, fighting on the front lines everyday in City Hall, in Albany and everywhere else we are needed,” said Moss Lee. “We are also doing that while trying to raise resources, awareness and consciousness within a racialized philanthropic landscape that is multilayered and complex and not always reflective of people who look like us.”

The luncheon was a result of almost a year of preparation and help from sponsors such as Harlem Children’s Zone and Emblem Health.