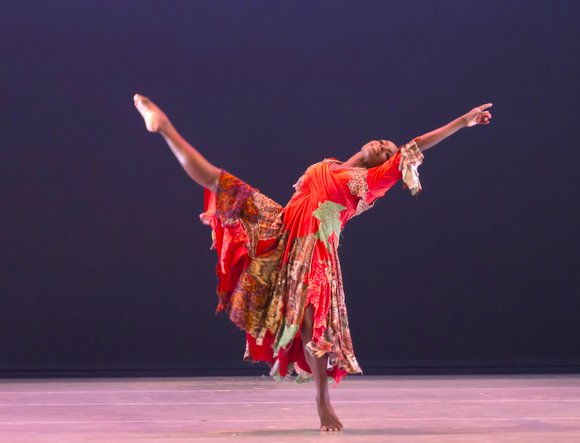 As always, the Alvin Ailey American Dance Theater took over the New York City Center stage for their annual month-long season. Regular Ailey audiences geared up for signature works, (Ailey’s “Revelations and Memoria,” for example), sitting on the edge of their seats in anticipation. At most performances, audiences raised their voices in song during the last section of “Revelations” (1960), or clapped along with a new staple, Ronald K. Brown’s “Grace”

(1999). The word is out about a new audience favorite, Ohad Naharin’s “Minus 16” (1999), in which during intermission, Samuel Lee Roberts in a full suit, performed a quirky, fun-filled dance in front of the closed curtain. The curtain opens, and a cast of 20 joins for a full 30-plus minutes of propulsive social dance, mixed with lavish contemporary movement cannons. Without doubt, when the entire cast leaves the stage, saunters through the aisles to choose a few audience members to join them on stage, it brings the house down. The dancers are fabulous in this work.

Aside from the enjoyable old, there were remounted, new and different works, thanks to Artistic Director Robert Battle, who keeps expanding the repertory.

By far, Ulysses Dove’s 1987, “Episodes,” danced by Kirven Douthit-Boyd, Sean Aaron Carmon, Jermaine Terry, Marcus Jarrell Willis, Renaldo Maurice, Rachael McLaren, Ghrai DeVore, Megan Jakel and Demetia Hopkins Greene was as raw and sharp now as it was then. In Ronald K. Brown’s spiritually charged “Four Corners” (2013), among a cast of 12 who individually manages to draw your eye, stand-out performances came from Matthew Rushing, Linda Celeste Sims and Belen Pereyra. Douthit-Boyd returned in David Parsons’ “Caught,” from 1982, with a fresh and easy take on how one can fly through the air with ease. Rushing’s premiere “Odetta,” inspired by the singer and human rights activist, brought back a true sense of Ailey, while Jacqulyn Buglisi’s “Suspended Women” (2000), showed off the talented women of Ailey. The men of Ailey, in this instance, Jeroboam Bozeman, Kirven Douthit-Boyd, Antonio Douthit-Boyd, Yannick Lebrun, Jamar Roberts, Jermaine Terry and Marcus Jarrell Willis, scored big in their rendition of Hofesh Shechter’s 2006 “Uprising” because they took on this work, like other repertory, with verve.