Happiness is a huge home win for the Liberty 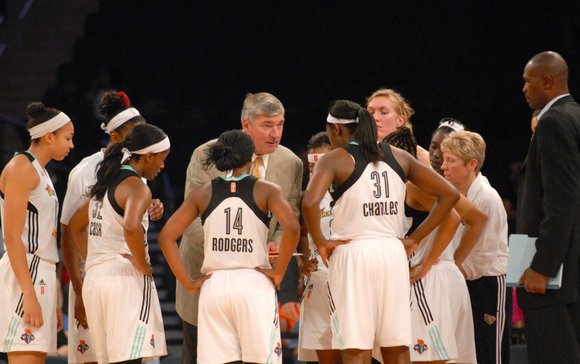 “For me, it was very personal. I’m so happy our team got the win,” said New York Liberty guard Candice Wiggins after the team’s 79-70 victory over the Los Angeles Sparks. “It’s pure teamwork. We relied on each other. Everybody did their part.”

Wiggins played for the Sparks in 2014, when they defeated the Liberty at Madison Square Garden, so she had a bit of insight into the longest running rivalry in the WNBA. While this past Sunday’s game didn’t quite rival the epic battles of the past—when Teresa Weatherspoon would stare down the Sparks’ point guard and Lisa Leslie often fouled out and took the long, slow walk to the bench while “Hit the Road Jack” played—it did spotlight the talents of two players. Sparks guard Kristi Toliver scored 30 points in a push to keep the Sparks from remaining winless, and Liberty guard Sugar Rodgers made huge baskets at crucial points and scored a career-high 23.

“No one’s riding the Sugar train harder than I am right now,” said coach Bill Laimbeer. “We always knew she had the talent. Defense play, she’s solid. Offense wise, all it needed was for her to click. Right now, it’s clicking.”

A modest asset at that. Rodgers said her impressive effort was a result of trusting the training and the coaches’ instructions. “It felt great,” she said. “Defend, rebound, share the ball, just go out there and have fun. That’s what we did.”

Tuesday night, the Liberty scored a huge 89-81 win over the Chicago Sky. Tina Charles had 26 points and Wiggins went five for five on 3-pointers.

The team has a few days off, which most of the players will use to visit family, before returning to training base Saturday. They’ll be joined by Epiphanny Prince, who will have a few days to settle in before the Liberty’s next game Thursday in Washington, D.C.

“We’re going to have a lot of practice days coming up,” said Laimbeer. “Get her up to speed on what we do. She’s a solid pick and roll guard. She can run the show. She can play the two guard. She can shoot deep. She can create for others and get to the free-throw line. That’s another asset we can really use.”