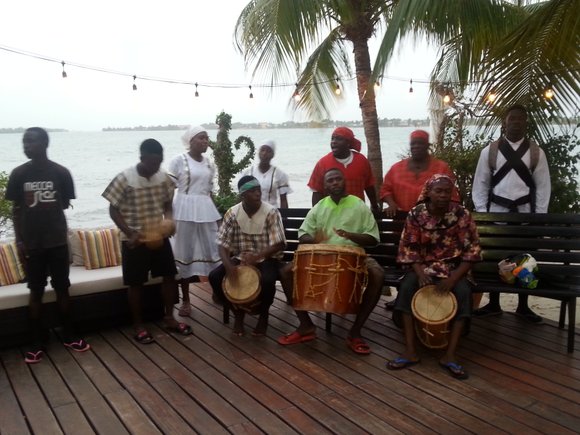 One of the major cultural influences in Belize is that of the Garifuna people, who's established communities along the coasts of Nicaragua, Honduras, Guatemala and Belize in the 1700s.

Because of the unique amalgamation of its people, you’ll hear several Mayan dialects, Garifuna, Spanish, Mandarin, Kriol (Belizean Creole) and, interestingly, English, the official language. In fact, Belize is the only English speaking country in Central America.

The weather here averages approximately 84 degrees and about 85 percent humidity, with a fairly constant breeze both inland and along the coastal areas. There are both dry (February to May) and wet (June to December) seasons, but neither too extreme, making Belize a comfortable destination year-round.

Each of the over 200 spectacular cayes scattered off the mainland offers its own unique Belizean flavor, and together they have earned Belize a reputation as one of the world’s happiest, most peaceful and most friendly tourist destinations.

After arriving at Philip Goldson International Airport, a 75-foot-wide-runway airport whose entire operation would fit inside one terminal at any U.S. airport, it was an effortless 10 minute Customs process and, literally, five-second walk across the breezeway to catch what I call a “puddle jumper” flight to many of Belize’s cities, islands and cayes, including Ambergris Caye, Kanantik, Punta Gorda, San Ignacio and Caye Caulker, among others.

Taxiing in a Maya Island Air, Cessna C208B Caravan 12-seater took about 30 seconds before it soared up and over miles of dense vegetation and thick banana fields, with expansive views of the shoreline so close at only a cruising altitude of approximately 2,500 feet that we could watch the waves rolling over each other as they hit the beach.

A short 35 minutes later, I gazed forward between the back of the heads of our headset-clad pilot and another passenger who had drawn the front-seat straw (in other words, she weighed the least of us) and saw a tiny airstrip, the pilot hitting it just right and moments later pulling in front of a small office building.

Once here, we unfolded ourselves from the plane, descended a five-step, metal platform and split up between two minivans that were waiting to shuttle us to our respective accommodations.

We had arrived in Placencia!

In our next adventure, we’ll learn about this beautiful, laid-back village and unpack our bags at the first of our Belizean vacation resort destinations.