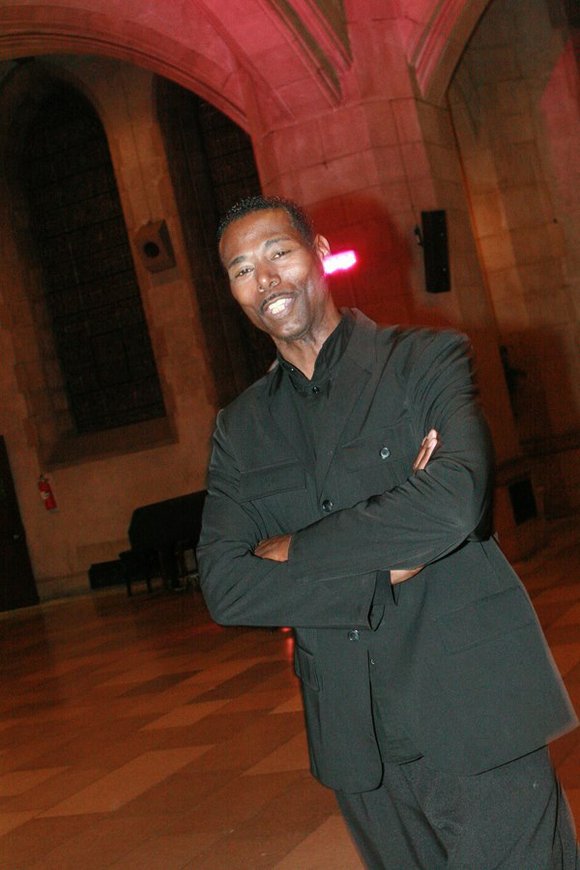 He fell off the stage during a Rainbow PUSH fundraiser concert after losing feeling in his legs. Doctors said he’d never walk again, diagnosing him with a ruptured spine and paralysis from the waist down.

James Ganett Elcok is an artist and newborn New Yorker by way of Compton, Calif. A freak accident confined him to a wheelchair for almost two years, but he conceived a beautiful means of expression. He says it’s a miracle that his sentence to his chair prison wasn’t for the rest of his life. It was faith and art that healed him, he says.

“When they said I was paralyzed, I would never accept it” he says. “When the doctors started to use the terminology paraplegic on me, I told them, ‘Don’t call me that.’”

As stubborn as he was motivated, Elcock decided that he would walk again, though he had no feeling in his toes. When depression started to creep in, he refused to be reduced to a puddle of self-pity. Instead, he turned his sadness into productivity.

The hospital became his sanctuary from the world. Elcock laughs when he tells the story. He insists that for the first month, he didn’t tell friends or family that he had been hospitalized and refused to leave Mount Sinai, where he was being treated, fearful that if anyone he knew saw him in a wheelchair, there’d be an endless stream of inquiry and shame.

Instead, Elcock kept to himself for a long time, attended exercise classes at the hospital (because he didn’t want to get fat) and often sketched his surroundings while laying in the bed. After a while, he realized he had a natural talent.

“I didn’t take pain medication. Art was my medication,” he says. “One day, I was on my way to class and I was listening to the song, ‘You Saw the Best in Me’ by Marvin Sapp. And in class I was rolling around and then I lifted my leg. I thought my mind was playing tricks on me. So I did it again to make sure. I told my doctors that I would walk again.”

And so he did. Months of physical therapy, exercise classes and tons of art healing eventually paid off, so much that he regained his ability to walk.

Elcock, who was a model, cook and fashion entrepreneur before his accident, believes that there is a healing power in art. For the first time since sketching his first portraits of nurses and doctors, he is coming out to the world as a spiritual artist and firm believer in art therapy. At his exhibit at the Harlem Hospital Center Pavilion July 17, Elcock wants attendees to experience his world and go on a journey with him through his bouts of darkness, faith, hope and illumination.

“It’s a celebration of healing through art with a spiritual connection,” the artist says. “I think there’s a lot of people who give up. My lesson in my art is that when you tap into faith, God can heal anything. Doctors said I would never walk again, but I’m walking today.”

Exhibition-goers will have the opportunity to interact with the artist and partake in an opening night celebration. The collection will be available for purchase.