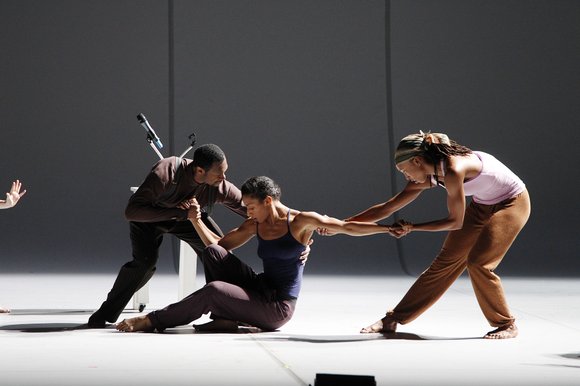 After 12 years in the making and now broken into 25 episodes of movement, music and story, “Analogy/Dora” voices “her family life, her mother’s death as the Germans were marching into Belgium, her journey onwards to France and the loss of further family members,” notes the press release. Amelan’s mother was quick to note that Jones has again partnered with someone of Jewish heritage.

“You like them kosher, don’t you, Bill?” she asked.

Responding in an interview with writer Robert Johnson, Jones said, “Well, yeah, in a way. Jews understand something that Blacks understand. The Jews wrote the Old Testament and Black folks set it to music. That’s a joke, in a way, but if you think about the stories being told—struggle, slavery, all those things from the Old Testament—Black people heard them and retrofitted them to their experience.”

“Analogy/Dora” brings to light an intimacy of an interview between Jones and Dora Amelan, where he probes these types of parallels, these truths. The dancers (Antonio Brown, Rena Butler, Cain Coleman Jr., Talli Jackson, Shayla-Vie Jenkins, I-Ling Liu, Erick Montes-Chavero, Joseph Poulson and Jenna Riegel) were then given the task of making real the words of the storyteller and interviewer all the while interweaving movement.

Microphones switch from person to person as easily as the voices, the movement and the persona. Shifting equally throughout was Bjorn Amelan’s decor of moving parts, constructed and deconstructed by the dancers to help recreate or create past and present places where the stories lay.

Dora Amelan’s words, such as, “They took this kind of people,” draw attention, and Jones’ movement halts time when surrounded by wailing sounds and song from the era on and off stage. Liu begins a solo with nearly invisible, joint-driven movement that is shadowed magically by the other women at different points. In one section, tensions rise when as an ensemble steps lightly on the balls of their feet, their limbs quivering and their elbows and knees open wide.

In another, as one unit, they curl and circle in and dart out of a recurring and supporting line against the back wall, mirroring yet another story. Though dark, this chronicling also included a story of good times when Dora Amelan “felt wonderful,” and her cousin Marcel Marceau (danced by Montes-Chavero) made them laugh. Jones’ big picture and the many other parts by supporting cast and crew gives Dora Amelan’s sensitive journey true justice. Nick Hallett (original score) and Eimly Manzo performed the music.