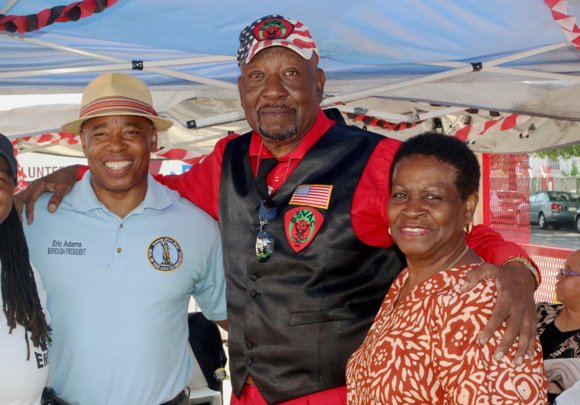 It has been happening every year for the past 26 years, but this year was different. The Bedford-Stuyvesant Volunteer Ambulance Corps found itself tangled and trapped between politics and developers on July 12, and despite flat tires on four emergency vehicles and a missing parade permit, the celebration of their 27th anniversary took place.

Along with his staff, Commander Rocky Robinson, a retired New York EMT captain, has traveled throughout the U.S. and to foreign lands to help with national disasters such as 9/11, Hurricane Katrina and the earthquake in Haiti. He is on a mission to save lives through educating the community and runs a state-certified school to train youths as EMTs.

His success record is impressive. Graduates have gone on to become doctors or join EMT teams with city agencies and hospitals. Said Robinson, “After my mother died I was despondent. I hit rock bottom, but I heard my mother’s voice telling me to get up and become the man she raised me to be. My mother died in my arms en route to the hospital. I worked myself up to be an EMT captain and decided to make a difference in my community and save our own lives. People in the ‘hood’ had no chance. We had to wait for someone who did not look like us to come and save our lives. We have to do for our own community.”

New York City Comptroller Scott Stringer came out to support BSVAC. Said Stringer, “I wanted to be here today. Flat tires and vandalism shows that someone is trying to hurt. My office is prepared to work with NYPD to investigate. This land is not just for speculators but also the community. I shared good times with Commander Rocky and I had to be here today in the bad times. As people talk about changing skylines, I hope they don’t change the history of Bed-Stuy.”

The Rev. Johnny Youngblood, pastor of Mt. Pisgah Baptist Church, said, “I did not understand the need for BSVAC until two years ago when Rocky helped me understand what people in the community went through, the ordeal, when they called for emergency service. Rocky is a pioneer. All public servants should be supporting him. I will support BSVAC until we get it where we want it to be. No permits are always political. BSVAC is doing real work in the community dealing with violence and health. Why can’t we have a Black-led group to do anything positive for our people?”

The diversity of those in attendance was quite remarkable. Every segment of Bed-Stuy came out to support BSVAC, including radio hosts; Jesse Flores from the office of Brooklyn Borough President Eric Adams; Toni Bennett, representing City Council Member Darlene Mealy; and Brother Paul Mohammed of Mosque 7C and members, all voicing support for the common good. Said Mohammed, “There is a tsunami of gentrification with a tidal wave that is killing the community, but the politicians are not representing us. Let them diversify the jails and the unemployment lines. I support and believe in the work BSVAC is doing. They serve the entire neighborhood.”

Everyone talked about the value of BSVAC to the community. Said BSVAC Deputy Chief McKenzie, “Since age 13, I was involved with Rocky. He saved my life. I would have been dead by now had it not been for him. He taught us to save lives. He takes youths off the streets. Instead of taking a life, we save a life.” The fleet of emergency vehicles and EMTs drove through the streets of the neighborhood encouraging youths to trade in guns for stethoscopes. Residents lined the streets, and some popped heads through windows and open doors to show their support.

Calls to the 81st Precinct to ascertain why the parade permit was not available this year were unsuccessful. BSVAC shares a block with the Upper Room Baptist Church, a now vacant and chained edifice, which was purchased in 1962 and offered many services to the community. This corner block, which stretches from Green Avenue to Van Buren Street on Marcus Garvey Boulevard, is prime real estate. It is urgent, community members said, that elected officials take a stand and support BSVAC and help their constituents because Black lives do matter.