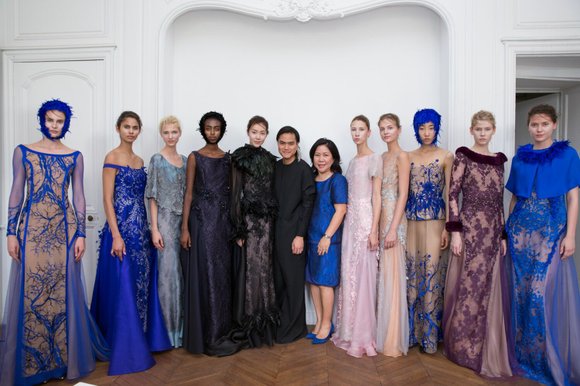 House of Busardi’s theme was “The Queen of the Night.” Before the show, Busardi Muntarbhorn, creative director of Busardi, talked about a sky before sunrise that’s soaked with love and light, and a queen who chooses fear and darkness. After Busardi’s resounding success as the first Thai label to show during Paris Haute Couture Fashion Week last season, he produced another spectacular show once again for autumn/winter 2015. In “Queen of the Night,” he captures a brief moment of glory in which love expels fear, light expels darkness and good expels evil. It’s here that his dramatic collection takes root. At the Paris haute couture shows, designers go all out to deliver their themes for a show. Expect just about anything. It is often pure theater, very dramatic, and you are literally sitting at the edge of your seat. Very moving, it’s a delight to see and experience.

Co-founded in 2009 by mother and son, Busardi and Tuck Muntarbhorn, Busardi is a semi-couture label that’s based in Bangkok. Before launching Busardi, Muntarbhorn was creative director and head designer for the family owned Yoswadee, Thailand’s oldest surviving fashion house, founded by Busardi’s mother. Grounded in couture roots, Busardi’s collections are produced and embellished by highly skilled artisans in the heart of Thailand.

On the catwalk, a model appears in a black brocaded cape and dress adorned with feathers and the designer’s signature lace appliqué. The ensemble is enhanced with a feathered mask over the face. Another model in a dark purple feathered cape is shown with a rich brocaded duchess satin cocktail dress with lace and fur trims. So far, his show plays on the image of the encroaching night that pervades the show. His textures are amplified through his layering of lace applique and Chantilly lace dresses. There are sound echoes of the river, while a draped turquoise chiffon is styled over an autumn-hued printed jacquard look. It’s an unstructured ripple effect. There is a battle with light as the turbid charge of an Arizona storm is captured by electric blue and black embroidered tulle gowns. Throughout the show, the moments are fleeting. Out of the blue, his signature cape returns to the runway. Black rose appliques sprout alongside a decadent embroidered fur-trimmed dress and more sinister romance takes hold.

As light recedes and the room becomes dark again, an electrifying queen materializes in full bloom in a lace appliqued Thai silk gown. She is radiant in her Chantilly lace with a long organza train, embellished with embroidered floral applique and a formidable collar of feathers designed by Austrailian designer, Nora Rieser. In this collection, the featured colors are black, dark purple, pale pink, silver, violet blue, dark navy, violet red, royal purple, turquoise and beige. 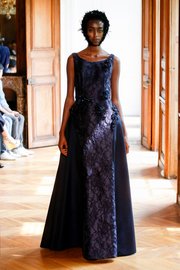