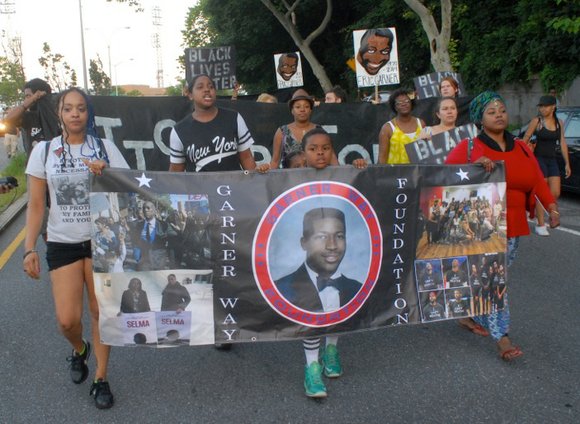 Dozens of demonstrators rallied on Staten Island Monday night to commemorate in advance of the one- year anniversary death of Eric Garner, an unarmed Black man who was placed in what Police Commissioner William Bratton called a “prohibited” chokehold by an NYPD officer.

Outraged police reform advocates and Black Lives Matter activists marched from the Staten Island Ferry terminal to the site where Garner died. While chanting the last words he said to officers before dying, “I can’t breathe,” they argued that police officer Daniel Pantaleo, who put Garner in the chokehold, has yet to be taken off paid administrative leave and fired.

“What is the city doing?” asked Garner’s daughter, Erica after the peaceful protest. “This is the spot, 365 days ago, where my father cried out that he couldn’t breathe, 11 times, calling for mercy and no one tried to help him.”

She urged supporters to continue the fight for justice and for “other victims of police brutality.”

“We will never forget!” she declared. “There has been no accountability since then and this has to stop!” She added, referring to the $5.9 million the city agreed to pay the family to resolve the wrongful death claim, “No amount of money can bring back the first man that I love.”

July 17, 2014, Garner, 43, was approached by police for allegedly selling loose, untaxed cigarettes. One of the officers, Pantaleo, used a chokehold to subdue Garner because he refused to be arrested. He was brought to the pavement and was heard gasping and repeatedly saying, “I can’t breathe!” EMT workers who arrived at the scene declined to give him medical attention, a cellphone video showed.

His death was ruled a homicide by the city medical examiner’s office. It also said Garner’s health contributed to his death, along with the banned tactic that was used.

“Do people know how many fights Eric broke up?” one man asked at the march Monday. “He broke up a lot fights on the streets. He didn’t want to see people hurt each other.” He added, “I’m sorry,” before he broke down in tears and walked away.

Thrust into the national spotlight, Garner’s mother, Gwen Carr, along with other relatives of unarmed New Yorkers killed by police, used Garner’s death to renew calls for police and criminal justice reforms. They championed an executive order Gov. Andrew Cuomo signed last week that gives the state attorney general’s office authority to investigate cases in which an officer kills an unarmed civilian.

Relatives initially lobbied the governor to push for legislation that would create an independent monitor who would review cases that involved people killed by police. They argued that district attorneys are too involved with local police, who help them build cases, which, they say, creates a conflict of interest and a lack of objectivity in cases involving police killings.

The governor, a Democrat, failed to reach an agreement with legislators in the Republican-controlled Senate before the legislative session ended last month. He had promised the relatives that he would sign an executive order if Albany failed to act.

But as the anniversary Garner’s death looms, activists say they just want Pantaleo and the EMS workers fired and for police to start treating citizens equally, regardless of skin color.

“One year later, the Garner family still get no justice and the city of New York has yet to accept responsibility,” said Hertencia Petersen, aunt of Akai Gurley, an unarmed man killed by an NYPD officer in a darkened housing project stairwell late last year. “Justice will not be served unless Pantaleo is fired and all killer cops are held accountable.”