‘You Betta Belize It!’ 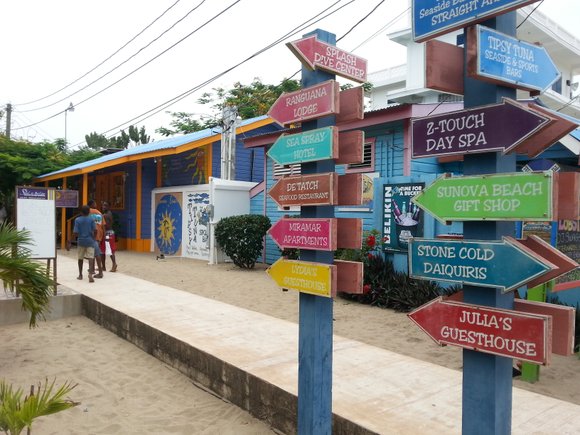 The main pedestrian-only drag in Placencia is a boardwalk dotted with jewelry huts, handcraft stores, clothing boutiques, restaurants and the like. (Lysa Allman-Baldwin photos)

It’s cute, catchy and you’ll see it everywhere you look in Belize: “You Betta Belize It!”

In part one of this travel series, we had just arrived at our first destination on this sojourn, the beautiful village of Placencia, located along an 18-mile stretch of the Placencia Peninsula (population 3,458) and encompassing four small villages—Riversdale, Maya Beach, Seine Bight and Placencia, which is home to about half of the denizens here.

Despite its size, there is a great expanse in the topography here, from approximately three feet above sea level to over 3,600 feet a short drive away in the Maya Mountain range. From here you can embark upon numerous short excursions, such as deep sea fishing, whale shark diving (four times a year during full moon), caving, sailing, scuba diving, visiting to the Mayan ruins, going on a Monkey River howler tour or trying an extensive jungle hike through a jaguar preserve, just to name a few.

Surf and sun lovers will enjoy immersing themselves along vast stretches of secluded, coarse, auburn sand beaches while dipping and out of the bathtub-warm, turquoise-hued water that ebbs and flows calmly from the offshore Barrier Reef (more on that later).

Placencia Village itself can be described as burning the candle at both ends but in a good way, in that it has maintained the substance of its traditional fishing village charm while also slowly developing into a more recognized tourism destination.

As the latter, it is evolving with a mix of new, locally owned retail shops, accommodations, restaurants and the like and will never (thankfully!) become an overly Americanized locale with a Starbucks, McDonald’s or Dunkin’ Donut on every corner. In fact, there are no American chain establishments anywhere in the entire country.

The main pedestrian-only drag here is an almost one-mile stamped concrete “boardwalk” dotted with jewelry huts, handcraft stores, clothing boutiques, excursion offices, bars, restaurants, small hotels, home and apartment rentals and locals selling handmade items on blankets, with pathways jetting out like spokes of a wheel on both sides to either the beach or the main street.

At the far end is a beautiful marina where the fishermen return daily, their boats laden with fresh snapper, shrimp, lionfish, lobster and other fresh seasonal catches of the day. The main thoroughfare running parallel to the boardwalk is where both denizens and tourists alike walk, bike, motorcycle, golf cart and drive along a combination paved-dirt street that’s peppered with oodles of bars, restaurants, alfresco produce vendors, retail boutiques, beauty and massage salons, art galleries, souvenir shops and a few large grocery and sundry stores.

At any of these places you will get the real feel for Belize and its wonderful people, as they greet you like family or close friends at every turn. They genuinely want to know where you are from, how you like their village, if it’s your first time in Belize—lots of questions followed by personal sharing in an attempt to make deep connections that make you feel as if they will last a lifetime.

As we ambled around and talked to folks, we learned that the locals are a diverse mix of native Placencians, Belizeans born in other parts of the country, people from neighboring Mexico, Guatemala and Honduras and large numbers of expatriates from the U.S. and Canada, and other tourists we met traveled there from Phoenix, Toronto, Philadelphia, Kansas City, Los Angeles, Miami, Arkansas, Australia, Santa Barbara, Dallas—you name it and people were loving it!

The ambiance is very warm and welcoming, with a distinctive Caribbean “no rush, island time” vibe, and without the crush of mass tourism.

For a village of this size, you’ll be pleasantly surprised at the number of cafes, bars and restaurants in which to stretch your salivary muscles—and all within walking distance of each other!

Among our favorites were DeTatch Seafood Grill, Restaurant and Bar, situated right on the beach and serving excellent fresh seafood and Belizean specialties for breakfast, lunch and dinner; Tipsy Tuna Beach Bar for their delicious bar food, cocktails, people watching and evening entertainment; and Omar’s Creole Grub & Guesthouse, where you can have their fresh fish, lobster, crab, conch and barracuda cooked in your choice of coconut or Caribbean curry, traditional Creole, or butter and garlic sauces. Other popular eateries include Friends, the Secret Garden, Rumfish y Vino, Barefoot Beach Bar, and Wendy’s Creole Restaurant and Bar.

One of the main reasons we chose to visit in June was for the 17th annual Placencia Lobsterfest, which coincides with the start of lobster season and the annual Fisherman’s Day festivities.

This award-winning festival has at its centerpiece everything lobster: coconut lobster muffins, lobster patties, lobster tacos, lobster burgers, lobster pizza, lobster flatbread, lobster ravioli, risotto with lobster, lobster salad, lobster fajitas—the list of delicious lobster-packed dishes is endless, each one offering its own particular flavor and flair for this crustacean, which we learned, in this part of the world, grows without claws!

Of course, there were other delicious Belizean and Caribbean culinary dishes as well, but during the festival, we didn’t have any of those—we were there for the amazing, succulent lobster! The festival itself lasts three days (the Saturday night fun spilling over until 6 a.m.). One of the things that makes it so unique is that it is put on by, and primarily patronized by, the locals, who come from not only Placencia but also other nearby villages, giving it real “hometown” heart and soul.

The wide array of activities include live entertainment—from marching bands to Garifuna drummers and singers, DJ jams, and other performances—spirited makeshift table carnival games, talented local arts and crafts vendors, fun raffles, a Belikin (the official Belizean beer) drinking contest, a hot wings eating contest, a Mr. & Ms. Physique contest and numerous family friendly activities, including tug-o-war, kayak racing, sand net casting and numerous booths presented by a variety of local social service and educational organizations. The crowning events for the fishermen are the “Biggest Lobstah’” and Lionfish tournament competitions, who vie for these titles and bragging rights for the next year.

SO MUCH MORE TO COME!

In our next adventure, we’re settling into two amazing accommodation options, both on and offshore, that will make you fall even more deeply in love with the wonder and beauty of Belize.