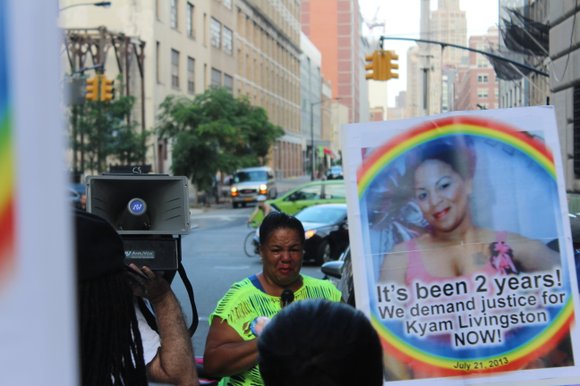 Kyam Livingston pleaded repeatedly for medical attention in the hours before she died in police custody at Brooklyn Central Booking jail, witnesses say. Two years later, her family is still asking why her request was denied and asking for criminal prosecution of officers involved.

Marking the two-year anniversary of Livingston’s death, relatives and dozens of enraged protesters converged outside the jail Tuesday evening and demanded justice, police accountability and reform. During the emotional rally, chants of “No Justice, No Peace,” “If We Don’t Get It, Shut Down” and “We Need Justice for Kyam Livingston, Ignored and Killed in a Booking Cell!” rose from the diverse crowd.

“I’ve been waiting for two years, getting tired, but I’m going to keep fighting,” Livingston’s mother, Anita Neal, declared. “I need justice for my daughter. This whole building needs to be cleaned out and that’s what I’m fighting for. I don’t want any another family to go through what I’m going through. It has to stop. I will not give up.”

Livingston was arrested July 19, 2013, after violating an order of protection taken out by her 78-year-old grandmother, Theresa Johnson, with whom she lived at the time. Johnson said she called the NYPD after Livingston drank alcohol and turned violent. The order prohibited her from drinking in the apartment. She was taken into custody and no charges were filed against her. Livingston was waiting to see a judge, Neal recalled.

Aleah Holland, an inmate who was in the cell with Livingston, told the New York Daily News that the victim was crying about stomach pains and diarrhea and had asked the officers for hours to get her medical attention.

“They said, ‘Shut up before we lose your paperwork, and you won’t be seen by a judge,’” Holland said.

Livingston was reportedly dead for 20 minutes before the medical personnel arrived the morning of July 21. However, NYPD officials claimed that Livingston was pronounced dead at Brooklyn Hospital Center. Livingston was working as a security guard at Elite Investigations, an investigative security and protection agency.

“They didn’t do anything,” said Neal, who later broke down in tears. “They let her drop dead on the floor, stood there and did nothing.”

While calling for police accountability, Djibril Toure, an activist with the Malcolm X Grassroots Movement, expressed anger at the city’s response. He urged supporters to “keep up the fight.”

“The fact that the city is not addressing it is why we have to stay together,” he said. “We have to fight back. We have to stay with the family as they struggle for justice. The city, for the most part, know these things are happening with their police. Kyam should have gotten attention, but they chose not to. They didn’t value her life. They need to be punished.”

Neal Furnkin, a member of the Justice for Kyam Livingston Committee, told the AmNews that Brooklyn District Attorney Kenneth Thompson had promised, since his campaign for office in 2013 to investigate what had happened.

“He told me that he was well aware of the case,” Furnkin recalled.

He added that Thompson’s office had promised to have meetings with the family on several occasions, but none have occurred. “He has not done right for this family,” he said. “We have no support, no contact. There’s a civil case going forward and we’ll keep the pressure.”

A spokesman for Thompson told the AmNews that the office had spoken with some representatives of the family. He said the DA’s office “conducted a thorough investigation into the case and found no evidence of misconduct.” The investigation was concluded last year, he said.