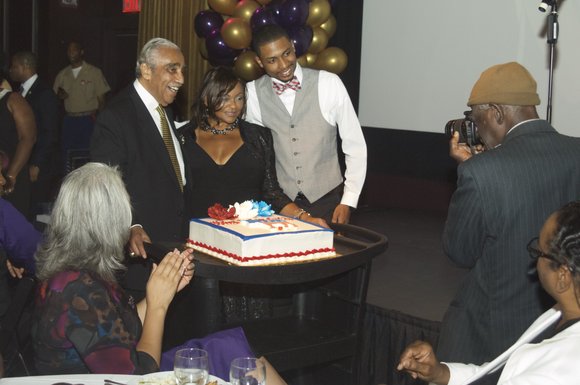 When Councilwoman Inez Dickens of Harlem gives a birthday bash-cum-fundraiser, you can expect a massive turnout, fabulous food and the sound of backslapping and glad-handing, all of which was present last week at MIST Harlem, and it was a special treat to see the lady of the hour take to the stage and put a boogie to a brand new beat.

After strutting her stuff, Lady Dickens thanked the crowd and speakers, Rep. Charles Rangel and Lt. Gov. Kathy Hochul. “Even though Kathy is from upstate, she came down here,” Dickens raved. “She did not forget Harlem.” She observed that during the last election, Hochul “won overwhelmingly in our community.”

“You are wind beneath my wings,” Dickens said of the community, which included a representative of practically every notable organization, along with three U.S. Marines and a contingent of New York City firefighters. “You are the ones who rock my world, and I know you’ve got my back.”

One Council member who certainly has her back is Ruben Wills. “When Inez says you are family, you are family,” Wills said after being called to the stage. “She’s the ‘Queen of Harlem,’ and I want to wish you a happy birthday.”

A special shout-out, or sing-out, to Dickens was delivered by vocalist Deon, and his rendition of the birthday song was nicely garnished with a blues icing that was almost as cool as the ice sculpture to her honor at the front of the stage.

Some of the folks found it difficult to leave the party without participating in an Electric Slide routine, and their nimble feet and twisting torsos were obviously inspired by Dickens’ swoops, sways and sashays.