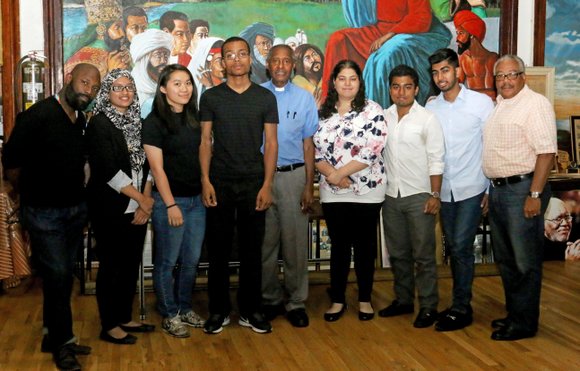 Jeffery Gamble, the Rev. Herbert Daughtry and Anton Tomlinson with the students

The New York City Academic, Cultural, Technological and Scientific Olympics program, one of the most inspiring and important youth programs in America, which plays a major role in the lives of many youths, is under-publicized.

The program, designed to encourage high academics and cultural achievement among underserved minority high school students, showcased the 2015 medal winners at the House of the Lord Church on Atlantic Avenue in Boerum Hill Friday, July 24.

ACT-SO, which operates under the aegis of the NAACP, was conceived by Vernon Jarrett of Chicago, a renowned journalist, author and civil rights activist, to promote and reward young academic achievers, as is done with sports heroes. ACT-SO’s first competition was held in 1970 in Portland, Ore., and since then, the program has helped more than 6,500 students.

The New York City ACT-SO chapter is led by Anton Tomlinson, its president and CEO. He is a former systems analyst for the investment firm of Solomon Smith-Barney. ACT-SO’s mission is to help Black students overcome low scholastic expectations by strengthening their academic skills and inspiring confidence through individualized mentorship in diverse areas.

The winners, all products of the New York City public schools, were fortunate to have teachers who were familiar with the program and encouraged them to enter the contest. The students had to follow a demanding regimen: conduct research, make oral presentations and create/design projects to support their theses/inventions. They competed locally, and the winners of the local competition moved on to the national competition, which, is held in a different state each year. Students win gold, silver and bronze medals, along with college scholarships. New York students have a won the most medals in the national competitions over the years.

There is nothing mystical about these students. They are from the same public schools that are considered non-functioning. However, these students have families and teachers who invest in their futures, despite the schools’ shortcomings.

Ann Barth attended the award ceremony with her daughter, Tiffany. Barth said, “I am so proud of her. I always knew that she had a lot of talent. All the family is supportive of her. At the age of 4 she got Play-Doh as a gift, and we noticed an extraordinary ability to carve and form objects and figures, so we nurtured that talent, and here she is today”.

All of the students discussed their special “gifts”: Lin talked about her “isolation of isomers.” Chasteao mentioned his desire to make classical music with the steel pan, “which is viewed as a novelty, and I want to bring it to the world stage.” Hillary is eager to bring his biological skills to the City College pre-med program. Yousef sees “recycle concrete and designing methods to improve and strengthen recycle concrete under hydraulic pressure” as having global significance.

Even though these young people are engaged in high-order thinking, they are not exceptions. Most youths have unique talents and a desire to succeed. It is the duty of educators and leaders to nurture those gifts. Minority children are not a menace to society as portrayed in media. We must emphasize the positive.