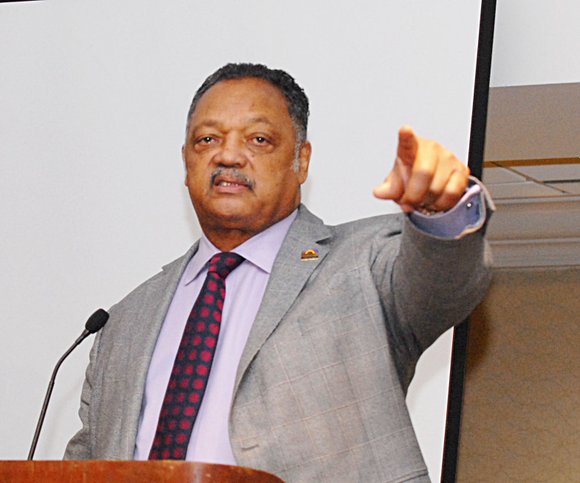 Although the Wall Street Project Summit is usually held in New York City in January, Jackson said he wanted to bring the event to Newark as businesses and industries move to New Jersey.

“During our 18th annual Wall Street Project Economic Summit held this past January, we focused on innovative approaches that corporations and minority entrepreneurs are taking to improve economic diversity, as well as a focus on the lack of diversity in the tech industry,” Jackson said. “We look to broaden this discussion at the summit in Newark.”

More than 200 corporate executives, small business owners, entrepreneurs, academics and community and faith leaders discussed the role of technology in the economic development and growth of New Jersey.

The summit featured remarks from Rutgers University-Newark Chancellor Dr. Nancy Cantor and state Sen. Ronald L. Rice, and it spotlighted scholars from Rutgers University and the New Jersey Institute of Technology who presented information on innovative practices for urban economic development, what manufacturing opportunities look like in New Jersey and what the public and private sector should be doing to drive the growth of the state’s urban centers.

The primary goal of the summit was to encourage tech education, training, programs and strategic partnerships to ensure New Jersey’s diverse communities are better prepared to take full advantage of tech-driven economic opportunities.

An additional component of the day’s activities was a youth seminar that featured discussions on career opportunities in technology, as well as a hands-on introduction to coding.

“Today’s business owners, entrepreneurs and employees must be prepared to compete in a high-tech global economy,” Baraka said. “As the largest city in New Jersey, Newark is transforming itself with groundbreaking initiatives in public safety, economic development, housing and community engagement. We are looking to lead the way in highlighting the importance technology is playing in our continued economic growth.”