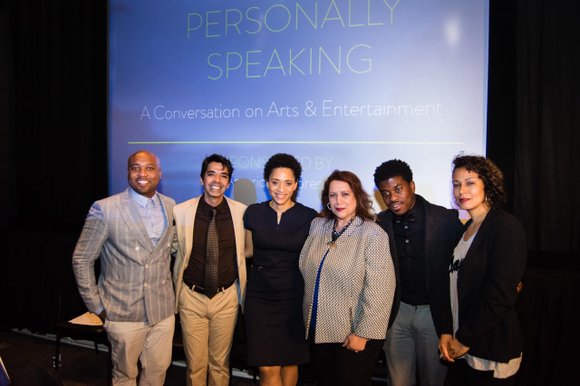 The Federation of Protestant Welfare Agencies convened its “Personally Speaking” series Wednesday, June 3, featuring leaders in the fields of arts and entertainment who have helped make New York a more vibrant and artistic city. FPWA’s “Personally Speaking” is a speaker series featuring prominent people who help shape the nonprofit, philanthropic, civic and business sectors in New York City and beyond.

This installment of the ”Personally Speaking” series, sponsored by American Express, focused on leadership and business in the arts. The panelists’ work, through both philanthropy and on the ground service, has helped some of New York City’s most vulnerable. The panelists included

Jennifer Jones Austin, CEO and executive director of FPWA, opened the evening with welcome remarks and saluted the panelists for exploring how the arts and entertainment communities can engage further with the New York City nonprofit philanthropic sectors by uplifting and inspiring New York City’s underserved. According to Jones Austin, “The arts have a long history of enacting social change; they now have a unique ability to reach and help the city’s most vulnerable. These panelists develop and oversee innovative, accessible methods of utilizing the arts to educate and empower those in need. They are leaders whose work is important not only for the arts industry but for all New Yorkers.”

Lopez, of the Mayor’s Office of Media and Entertainment, whose mission includes supporting relevant media and entertainment industries in New York City, talked to the audience about setting their own standards of excellence and not letting anyone change that for them. She also urged them to accept rejection and move on when it happens.

Also joining the panel was Muhammad, who is responsible for a new content initiative that creates meaningful ways for today’s content creators to further engage Time Warner’s divisions with the company’s longstanding focus on the development of the next generation of storytellers. Muhammad was vocal about Time Warner’s commitment to giving a voice for the voiceless, and he urged the audience participants to be ready when opportunity knocks on the door and to make sure that they seek creative partners who are in sync with them.

The final panelist,  Diaz, is an award-winning community organizer, media producer, archivist, curator, educator, mentor and social entrepreneur. In 2010, Diaz founded the Hip-Hop Education Center to cultivate and professionalize the field of hip-hop-based education. Diaz is a professor at New York University’s Gallatin School and a Columbia University community scholar. Diaz said she pursued her path so she could challenge the media by becoming an independent filmmaker, and she urged the audience to do the same.

Torres served as moderator of the panel and did a great job engaging the audience in the dialogue. He shared the commitment by the city to give opportunities to New Yorkers in the arts.