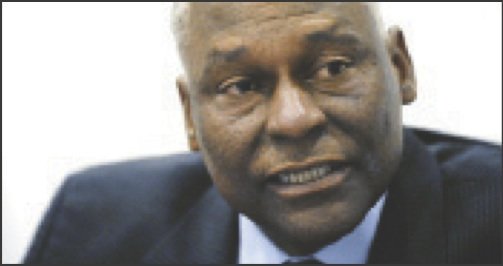 Cheered on by friends, associates, his wife, Susan, and a cadre of clergy, including the Rev. Calvin Butts III of Abyssinian Baptist Church, Assemblyman Keith Wright officially announced his candidacy for New York’s 13th Congressional District, a seat that has belonged exclusively to Rep. Charles Rangel for over 40 years.

“There is no one more honorable candidate to fill this position than Keith Wright, and I am finally glad he has made that decision,” said Butts during his introduction of Wright last Saturday at Union Grove Missionary Baptist Church in the Bronx. “I think he has the political sagacity, the acuteness to represent a district like ours in Washington, D.C.”

Over the past several years, that district has undergone several changes and now encompasses Harlem, Inwood, Marble Hill, East Harlem, Washington Heights, the Bronx, Morningside Heights and parts of the Upper West Side.

After the reverend’s introduction, the modest gathering began chanting, “Run, Keith, run.” Wright thanked them for their support before launching into his first campaign speech, citing the inspiration he received from Adam Clayton Powell Jr. and Rangel.

“Congressman Rangel has been my mentor for so many years, and all I ever wanted to do after I finished law school and waited in the employment line was to get a job with Charlie Rangel,” he said. “He told he could get me a job, but he was more interested my career. And that always stayed with me.”

This was more than a moment of homage for those who had preceded him. He began listing a litany of current issues and problems facing the community he hopes to represent.

“The inexcusable treatment of Eric Garner, the anger unleashed in Ferguson, Missouri … and Baltimore, Maryland, are wake-up calls,” he stressed before listing what he believes are some of the challenges before him, including “the evils of racism … poverty, an education system that fails our children, the concentration of wealth in the hands of too few and the experience of deprivation in the lives of too many.”

He said it was these things and more that had prompted him to enter the race, a quest that was endorsed by the pastors in attendance, as well as former Gov. David Paterson. “The next congressperson to represent the 13th District is going to have a challenge that even in the 70 years of the service of two larger-than-life figures such as Adam Clayton Powell Jr. and Charles B. Rangel [was formidable],” Paterson said after acknowledging the presence of such notables as Council Member Inez Dickens, Hazel Dukes, Felipe Luciano and Assemblyman Jeffrion Aubry, Wright’s roommate in Albany, N.Y.

The district’s changing demographics and the fact that it’s in two boroughs were some of the complexities the incoming representative will face, Paterson noted. “It is going to be the most diverse neighborhood,” he continued. “And it’s going to take a person of a rare combination of skills to do it. But there’s one in the race who has already done it. His name is Keith Wright.”

Once again, those assembled, led by the church’s pastor, the Rev. Frederick Crawford, stood and applauded.

“He’s the man, and the right man for the job,” one of the ministers said, giving another pastor a high five.

Of course, the 800-pound question in the room was who will Rangel choose as his successor? Left to the folks at this prayer breakfast, they had just heard their choice.